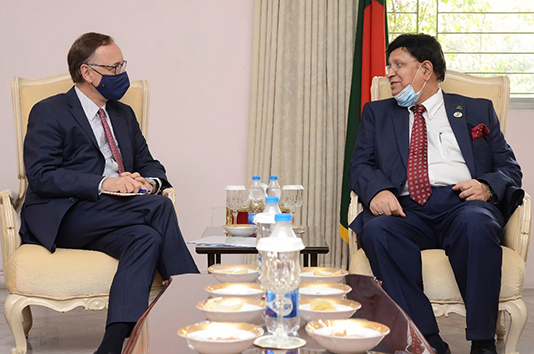 DHAKA, – The Netherlands has reiterated its firm vows to ensue justice and accountability over atrocities committed against Rohingyas by Myanmar authority through International Court of Justice (ICJ).

The Dutch vows was reiterated in a letter written by Netherlands foreign minister Stef Blok to his Bangladesh counterpart Dr A K Abdul Momen.

The Dutch envoy said his country is committed to find out a durable solution of the Rohingya crisis while Verweij laid emphasis on importance of justice and accountability front in this regard.

He assured the foreign minister that his country’s humanitarian support for the forcibly displaced Rohingyas and the Bangladeshi host community will be continued.

Dr Momen said Bangladesh has been giving highest priority over safe and dignified repatriation of Rohingyas to Rakhine, their land of origin, as solution of the crisis.

The foreign minister urged the Netherlands government to play effective role through coordination with other European Countries (EU) in creating conducive environment inside Rakhine state of Manatee for ensuring repatriation of the Rohingyas.

On September 2, The Netherlands and Canada in a joint statement committed their all-out support in favor of the case filed by Gambia against Myanmar for committing atrocities against Rohingyas to the ICJ, located in The Hauge, a Dutch city.

The Gambia had brought the case against Myanmar to the ICJ with the backing of the Organisation for Islamic Cooperation (OIC), Canada and the Netherlands.

At the December hearing, Gambia accused Myanmar of breaching the 1948 UN Genocide Conventionthrough a bloody military campaign with an aim to “get Myanmar to account for its action against its own people: the Rohingyas”.

Bangladesh is hosting over 1.1 million forcefully displaced Rohingyas in
Cox’s Bazar district and most of them arrived there since August 25, 2017
after the military crackdown at their homeland.