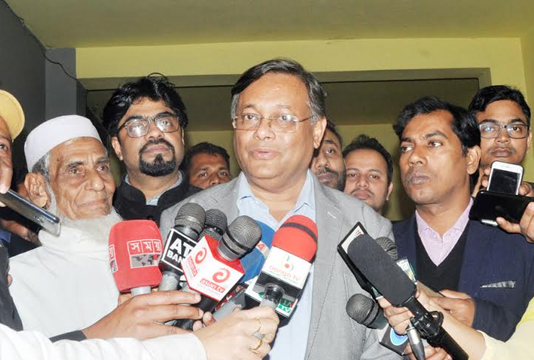 “I will call BNP to work together instead of raising questions or doing politics over the outbreak of the coronavirus. I will urge them not to find
out politics in everything,” he told a press conference after holding a meeting with Natore district AL leaders at the party president’s Dhanmondi
political office in the city.

Despite taking necessary measures at airports, seaports and land ports across the country, three people have been infected with the COVID-19 in the
country as two of them returned home from abroad being infected with the virus, the information minister said.

United States (US), France, German, Belgium and Singapore and other developed countries have much more economic and technical capacities than
Bangladesh, but the number of coronavirus patients in these countries is higher than Bangladesh, Hasan said, adding over 100 countries could not keep them away from coronavirus.

Prime Minister Sheikh Hasina, however, has taken all-out preparations for treatment of the disease in the country, he said, adding activities are going
on as per the preparations.

“But, BNP’s work is to criticise others. They do the politics of finding out error. I would like to urge BNP Secretary General Mirza Fakhrul Islam
Alamgir to learn more about COVID-19 that the virus can’t be detected immediately. It can be detected after 15 days of transmitting the virus,” the
AL joint general secretary added.

About the party, Hasan said some intruders have entered the party as AL has been in the state power for a long time, but the dedicated leaders will
be in the leading positions.

“Activities are going on to expel the infiltrators from the party as per the decision taken before the last party council. Those who have unconditional trust on AL and its President Sheikh Hasina will come to leadership,” he added.

Noting that AL is in the state power for third consecutive terms due to Prime Minister Sheikh Hasina’s true love for the country and its people, the
information minister said it has been possible as the premier led the movements for establishing the rights of votes and food for the people through various hurdles throughout her long political life.

Hasan said Prime Minister Sheikh Hasina has been emphasising on organisational activities as the party is not under the government rather the
government is under it.

She is looking after the party apart from operating the government, he said, adding,”Sheikh Hasina is the sources of endless inspiration for our
party”. Though no council of AL will be held in March and April, organisational activities will continue, the AL joint general secretary said, adding that no programme of the birth centenary of Father of the Nation Bangabandhu Sheikh Mujibur Rahman has been cancelled rather it has been rearranged.

Replying to a query on filing a case against some people, including Daily Manab Zamin editor, for publishing a list of some people for their alleged
involved with Shamima Nur Papia, the information minister said publishing any fictional list in any media without scrutiny can never be acceptable.

“Some fictional lists have been published in different media. If anyone did it whatever newspapers, online or any other format, he or she can’t avoid
liability,” Hasan said.

Referring to the case filed in this regard, the information minister said anyone can file case if he or she gets aggrieved. It is his or her constitutional rights, he added.

But publishing any name in any responsible newspapers or online or electronic media without scrutiny, the authenticity of the respective news do
not fall under the preview of responsibility, the AL joint general secretary said, adding that they should take the liability of their irresponsibility.

BNP will no more be ashamed to chant ‘Joy Bangla’ slogan: Hasan

Quader urges BNP not to do politics over coronavirus
Latest