Quader urges BNP not to do politics over coronavirus

DHAKA, – Awami League General Secretary and Road Transport and Bridges Minister Obaidul Quader today called upon BNP to cooperate with the government in tackling corona situation shunning their nasty politics over it.

“It’s not fair to do politics over humanitarian and sensitive issue. Rather you (BNP) should cooperate with the government to tackle the corona
situation,” he told a joint meeting at AL central Bangabandhu Avenue office here.

Quader said the government has taken all-out preparation to face the challenge. BNP has destroyed the political courtesy by carrying out heinous
incidents like August 21 grenade attack, the AL general secretary said.

“Even after that, we are seeking cooperation from all. So, we urge BNP to refrain from spreading political hatred over the situation,” he said. The minister said the whole world is worried and panicked over the spread of the deadly novel coronavirus (COVID-19).

“I want to tell, those who are saying the government did not remain prepared to tackle the coronavirus situation, that it (the government) has
taken central preparation and the concerned ministry and divisions have taken simultaneous preparations soon after the spread of coronavirus (in the
world),” he added.

Quader said detection of coronavirus of the Italy returnees could be possible because of the government’s preparation and it took necessary
measures for the two individuals immediately.

Another person was affected by the virus from the duo and the government also took measures for the affected person, he said, adding that apart from
that no new case was detected. He said BNP is searching for newer issues and even they are now out to make corona situation an optical issue.

The minister said the spread of coronavirus is now a global concern as it is spreading in fresh countries. “As we remain prepared, we are lucky. The virus could not spread in our country and the viral infection was not so serious,” he added.

The joint meeting was arranged for discussing contemporary issues and revised schedule of the inauguration of Mujib Year. Presidents and general secretaries of Dhaka City north and south units of AL and its associate bodies, party lawmakers and mayors of the two city corporations joined the joint meeting. 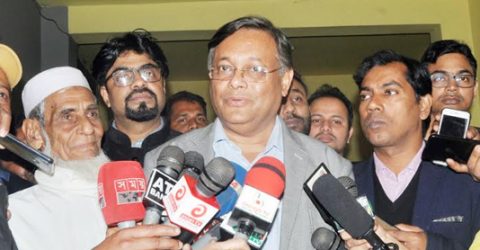