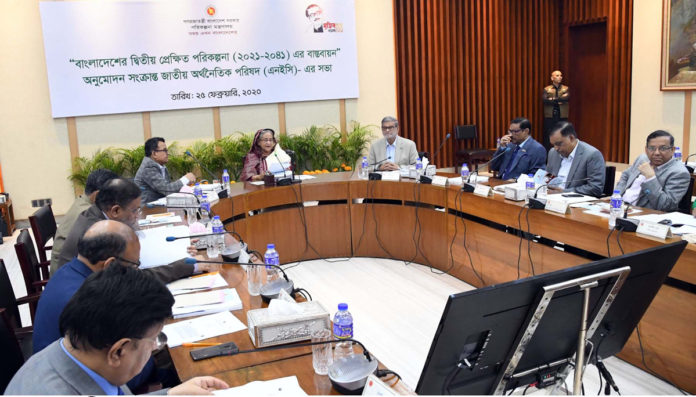 DHAKA,  – The National Economic Council (NEC) today approved the country’s second Perspective Plan for the year 2021-2041 in a bid to turn Bangladesh as a higher mid-income country by 2031 and a higher income and developed country by 2041.

The approval came from the NEC meeting held at the NEC Conference Room with its Chairperson and Prime Minister Sheikh Hasina in the chair. The implementation of the country’s first Perspective Plan (2010-2021) is nearing completion.

Briefing the reporters after the meeting, Planning Minister MA Mannan said the meeting approved this historic outline document for the next 20 years based on four institutional pillars which are governance, democratization, decentralization and capacity building.

According to this long-term plan projects, the country’s per capita income on current price would stand at US$12,500 by 2041. It said the country’s GDP growth rate in 2031 is expected to reach nine percent growth while it would further expect to grow at 9.9 percent in 2041.

Major goals of the mega plan are to eliminate extreme poverty by 2031 and to bring down the poverty rate below three percent by 2041.

It also aims to ensure industrialization and structural transformation as well as exemplary change in the agriculture sector and export-oriented
economy.

The Planning Minister said although the NEC today gave approval to this final document of the Perspective Plan, the Ministries and Divisions would be able to give their further inputs within the next one month and thus those would be in incorporated.

The planning minister said this document has been framed and approved aiming to further alleviate poverty, further strengthening good governance
and transforming Bangladesh into a modern and world-standard digital country. Mannan said the NEC meeting suggested incorporating some points in the document which includes strongly highlighting the message that Bangladesh is a welfare-oriented country, further updating the data, highlighting further the role of the expatriate Bangladeshis as well as the prospects of the fourth industrial revolution and ICT, putting more emphasis on agro- processing industries, skills development, agriculture, education and rural poverty eradication and putting more emphasis on researches.

He said Prime Minister Sheikh Hasina lauded this document and highlighted a couple of issues, including putting due emphasis on creating necessary
tourism infrastructures. Answering to a question, Mannan said although the country earlier used to rely heavily on foreign aid for implementing its plans and programmes, the country is now shifting its stance.

“We’ll now depend mainly on our local sources for implementing this plans,” he said, adding that the lion share of the funding of this mega plan
is expected to come from the domestic sources.

General Economics Division (GED) member of the Planning Commission Dr Shamsul Alam said this Plan is a historic and dream document for the country which gives a guideline where Bangladesh would stand socio-economically within the next 20 years.

He said the meeting also underscored the need for highlighting the issue of reducing the income inequality and rich-poor disparity. The Plan document highlights that the country’s export earnings is expected to reach $150 billion by 2031 and $300 billion by 2041.

The Plan also projected that the expected life expectancy of the country’s people will increase to 75 years in 2031 while to 80 years in 2041, the
population growth will remain at 1 percent both in 2031 and 2041. 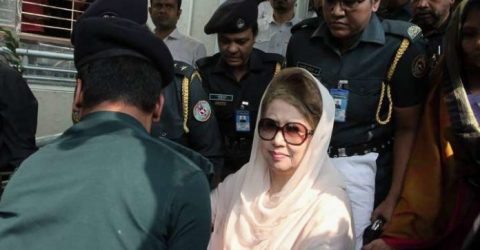 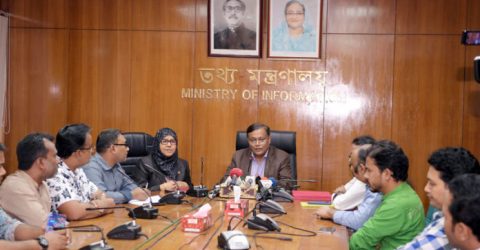