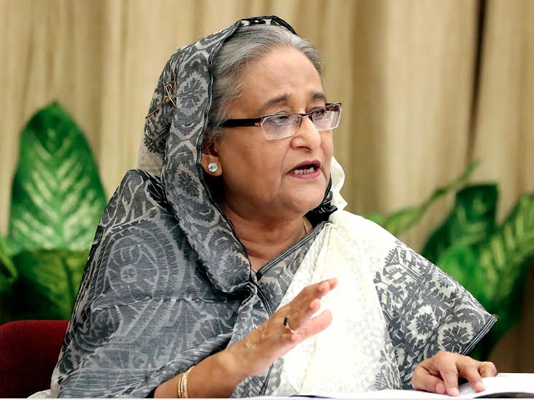 DHAKA, – Prime Minister Sheikh Hasina today asked the new administration cadre officers to work for ensuring justice for all as she addressed certificate-giving and closing ceremony of the 119th and 120th Law and Administration Training Courses. “Stand beside the people and ensure justice for them utilizing the knowledge acquired from the training,” she said.

She joined virtually the program held at Bangladesh Civil Service (BCS) Administration Academy in the capital, from her official Ganabhaban residence here this morning. While addressing a group of young officers, she referred to culture of impunity prevailing in the country after assassination of Bangabandhu. She reminded the new officers that, “We even had no right to file a case or demand trial after assassination of my father, mother and brothers in 1975 as the then illegal government gave the killers indemnity by enacting laws”.

In this connection, she called herself “a victim of not getting justice” after assassination of her father, mother and brothers on August 15 in 1975. The Prime Minister said Awami League later rescinded the indemnity law and held the trial of the killers after coming to power in 1996. Mentioning that she became Prime Minister of Bangladesh following the footprint of her father (Bangabandhu), Sheikh Hasina said, “I never think myself a prime minister. I consider myself as a servant of people. My duty is to serve them.”

She asked the new officers to go to the grassroots and work as servants of the people to ensure their welfare. The Premier added: “In accordance with the article 21 (2) of the Constitution, the government employees are always bound to serve the people. So, you have to engage yourselves to serve the people as constitutional obligation.” “I want you (new officers) to work as servants of the people,” she said. She also asked the fresh officers to expedite uplift works for ensuring country’s overall development as it turned into a hunger-and-poverty free country as envisioned by Father of the Nation Bangabandhu Sheikh Mujibur Rahman.

Sheikh Hasina said that her government has established virtual courts during the Coronavirus pandemic period to keep continuing the court proceedings so that the people get uninterrupted services of the law. State Minister for Public Administration Farhad Hossain, Senior Secretary of the Ministry K M Ali Azam and Rector of the BCS Administration Academy Mominur Rashid Amin spoke at the function, from the academy. On behalf of the Prime Minister, the State Minister for Public Administration later distributed certificates and crests among three officers securing first, second and third position in the merit lists in the 119th and 120th training courses.

A total of 78 BCS cadres including 55 male and 23 female took part in the two training courses. Of them, 50 officers got A+ while 28 others A. Twenty of the trainees — 11 male and nine female– have received certificate of excellence award for their outstanding performance in the training courses. Among the twenty officers, 10 each from the two courses, have got the award. Shikrity Pramanik and Ummeh Salma Nazneen Trisha, who secured first positions in the merit lists and became rectors of the 119th and 120th training courses respectively, also spoke at the function on behalf of the trainees. A video documentary on the BCS Administration Academy was also screened at the function.

The premier simultaneously asked them to be innovative, confident and to develop themselves with time-befitting knowledge to reach the outcome of country’s development at people’s doorstep. Sheikh Hasina said since the world is changing constantly, the officers must cope with the changes and familiarize themselves with new technologies. “Keeping in mind that the world is progressing fast, we have to move forward and keep pace with the changes as globalisataion is taking place across the world.

We don’t want to lag behind anymore,” she added. The prime minister said training is indispensable for building an efficient and pro-people public administration. Her government has been organizing training for the officers both at home and abroad so that they can cope with the constantly changing world. She hoped that the fresh BCS admin cadres will use innovative ideas for ensuring overall development of the localities they are now working for and thus accelerate the country’s development spree by applying their acquired knowledge from the training courses. The prime minister said the government planned to expand the officers initial training period to increase their efficiency in materialising Bangladesh’s “Vision 2041” and turn it into a prosperous and developed country as dreamt by Father of the Nation Bangabandhu Sheikh Mujibur Rahman.

Sheikh Hasina said government officers of every batch, were given their desired promotion and other facilities such as car and home loans and accommodation, so that they can devote themselves to the welfare of the country and the people. Describing the new officers as soldiers of 2041, the premier hoped that they would take the responsibility of the country to build it as a developed and prosperous one by 2041. Sheikh Hasina also asked them to work for maintaining the status of a developing nation which Bangladesh achieved due to her government’s timely measures and relentless efforts.

She said her government has formulated Delta Plan-2100, so that generation after generation would get a better life in the days to come. Mentioning that few generations were kept in dark about the true history of the country after 1975, which she termed as the most shocking incident for the nation, she called upon the new officers to know about the country’s real history.

She said one can know the true history of the Liberation War or how much struggle and sacrifice Bangabandhu endured for achieving the country’s independence, by reading the Ausamapta Atmajiboni (The Unfinished Memoirs: Sheikh Mujibur Rahman), Karagarer Rojnamcha (The Prison Diaries), Amar Dekha Naya Chin (The New China as I Saw), and the volumes of books on the Pakistani intelligence reports against Bangabandhu since 1948.

Spelling out various measures taken by her government for ensuring the country’s overall development, the Prime Minister said their (government’s) main goal is to change the fate of the people by upgrading their lives and livelihood. As part of the initiative to give people a better life, she said her government has taken Ashrayan project to provide houses to every landless and homeless people marking the birth centenary of Father of the Nation Bangabandhu Sheikh Mujibur Rahman. The prime minister thanked the government officers for working sincerely in implementing the housing project and vaccination programme across the country and extending all-out support to the distressed people during the ongoing Covid-19 pandemic.

Quader seeks cooperation of BNP, others in forming neutral EC 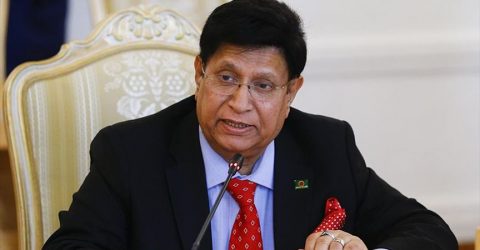