Satellite city to be built on the banks of Jamuna : Khalid Mahmood

Shafiqul Islam (Shafiq)
State Minister for Shipping Khalid Mahmud Chowdhury has said that a satellite city will be set up on the banks of the Jamuna river if it can be brought under proper management. At the same time, the industries established along the river banks have to be removed. Otherwise they will have to face a difficult situation. He made the remarks at the BSRF Dialogue on Wednesday (September 15) at the Secretariat’s Media Center.
Bangladesh Secretariat Reporters Forum (BSRF) hosted the dialogue at the secretariat. The program was presided over by the president of the organization Tapan Biswas and conducted by the general secretary Masudul Haque.

The state minister said a consultation was underway with the World Bank to bring the river Jamuna under proper management, naming the project the Jamuna Economic Corridor. If we can implement the project, we will not only be able to collect millions of hectares of land here, but also provide a solution to the erosion of the Jamuna. Satellite city will be built on the land that will be collected. But the work will be long-term. People will be protected from floods and river erosion. An action has also been taken with the river Teesta. Activities are also going on with them.

Mentioning the immense importance of the shipping sector in expanding international trade, the state minister said the seaports have been made much more efficient. As a result, the shipping sector has played an important role in the economy during the Corona period. Besides, the bay terminal will be built by 2024.

If this is done, the ship will be able to anchor 24 hours a day. However our purpose was to make a deep seaport. In the meantime it is going on in Matarbari. The director of this project has been appointed. I will be able to finish it in 2024.

Khalid Mahmud Chowdhury said that if the opportunity given by the government to remove the industrial establishments along the river is not properly evaluated, many difficult situations may have to be faced in the coming days. He told reporters that not all the people occupying the river are big mafia, but there are ordinary people. “We want to give some time to the industries that have sprung up along the river,” he said. Cause, it has a lot of investment from industry owners. No one in Bangladesh has ever thought that a river has its own place.

It is the responsibility of the state to create this ideas, the state has not done that for a long time. We want to build 10,000 kilometers of waterways across the country. It was part of the Awami League’s election manifesto. We are working towards that goal. In the meantime, we have been able to build about 3 thousand kilometers of new and old waterways.

He further said 3 cruise vessels of international standard are being procured. These will have all kinds of facilities including helipads. It will be possible to collect these by the end of 2023. Cruise vessels will be procured at BIWTC (Bangladesh Inland Water Transport Corporation). He added that in the latest incident of collision on the Padma Bridge, the bridge authorities had said that there was no collision. The video was captured when the signal light was turned off. 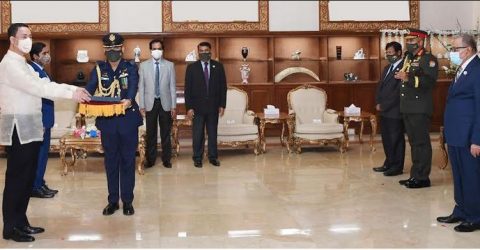