Bangladesh’s first military ruler Ziaur Rahman appears to be the central figure behind the August 15, 1975 carnage as unfolding records and newer studies inside the country and abroad substantiate previous speculations that he was the key-shadow man of the plot.

“Zia could not be indicted in Bangabandhu murder trial as he was dead by the time the trial process began,” Law Minister Anisul Huq, who was a key persecution lawyer of the case, told BSS in an interview coinciding with the National Mourning Day.

But, he added, all indications suggest that the assassins on the field proceeded with Zia’s consent in killing Father of the Nation Bangabandhu Sheikh Mujibur Rahman along with most of his family members.

Huq, the key aide or second man to Bangabandhu Murder Trial’s chief prosecutor Sirajul Huq, who happened to be his father as well, said Zia instigated the killers and eventually became the main beneficiary of the carnage.

He said key-convict of the trial sacked colonel Syed Farook Rahman and his main partner fugitive convict sacked colonel Abdur Rashid’s wife Zobaida Rashid had testified that the killers approached Zia with the plot and secured his consent for staging the bloody coup.

“Yes, my father now is regarded as the killer, but who used him? . . . that man eventually appeared as the hero,” Rashid’s daughter Mehnaz Rashid said in a comment to a BSS correspondent after the trial, clearly referring to Zia, who was the deputy chief of army at that time.

The then army chief major general KM Shafiullah recently came up with a detail account of the situation during and after the carnage in a book titled “15th August: A National Tragedy” where he outright accused his deputy of protecting the killers from military actions.

“From the day one whatever action he took and whatever assistance that he tried to give me was all to help the rebel troops (killers),”wrote the octogenarian general recollecting the sequences of the August 15 episode.

Shafiullah said on August 15 morning he asked Zia and the then army’s chief of general staff brigadier general Khaled Mosharraf to come to his house and both appeared there within 15 to 20 minutes time.

“Although both of them were in front of me within about 15 to 20 minutes time, yet these differences did not strike me then . . When I had time to think, then only I realized who was doing what!,” Shafiullah wrote.

Shafiulah said subsequently he came to know hat before reporting to him, Zia as the deputy army chief gave some directives to Dhaka cantonment-based crucial 46th independent infantry brigade chief colonel Shafaat Jamil but surprisingly did not inform him anything about his orders, which is suspicious.

On the other hand, when Shafiullah ordered Khaled to go to 46 Brigade area to help Shafaat to move troops against the killers “General Zia vehemently opposed it” and said “He (Khaled) is going to spoil it”.

“When I try to recollect those moments now, the question arises what Brig. Khaled was going to spoil for which General Zia was so worried. Was those action in 46 Brigade area likely to go against the plan that he made?,” Shafiullah wrote.

The then army chief recalled after Khaled returned from 46 Brigade finished his reporting, “General Zia suggested that the CGS should not go out now and should sit down to prepare an Operations Order (Ops Order) for the army to move towards the border to face an Indian offensive”.

“Though this could be a possibility, there was no such indication till then (and) the most important task for me then was to handle the death of Bangabandhu . . . I, therefore, told General Zia that let me handle this delicate situation first,” he said.

Shafiulah said he now believed Zia probably did not want “any interference in whatever was happening and whatever he was doing” while he referred to convict Rashid.

He said Rashid told him that Zia had assured him “if they succeeded in their scheme in that case he would give them a helping hand”.

“The rebel troops were thus going ahead as per their plan and with the blessings of General Zia . . . to achieve this goal, Brig Khaled’s action could put their plan in jeopardy (and) so General Zia’s apprehension of so called Indian aggression was nothing but a deceitful way to divert my attention.”

Shafiullah said Zia actually had been harbouring ill will against Bangabandhu and his government right from the time when “I was made the Chief”.

“Khandaker Moshtaque knew about this and he became his ardent sympathizer. . . After the assassination of Bangabandhu, Khandaker Moshtaque with the active support of the rebel officers appointed General Zia as the Chief of Army Staff, who was their choice. General Zia finally achieved what he wanted and started his activities to achieve his final objective!,” he wrote.

The law minister substantiated Shafiuallh saying had Zia not a party of the conspiracy, why did Mushtaq install him as the army chief while the killers too preferred none but Zia to be in that position.

“During his entire period of presidency, Ziaur Rahman had awarded and protected the Bangabandhu’s killers instead of trying them, why?” Huq said.

Few years after Bangabandhu murder in an interview with journalist Anthony Mascarenhas both Farooq and Rashid said that Zia had known about the coup beforehand.

Farook admitted to have a meeting Zia on March 20, 1975 as part of carrying out their plan.

But famous US journalist Lawrence Lifshultz, known for his extensive studies on Bangladesh and its political scenario particularly in 1970s, referred to his latest finding about Zia’s role in the episode.

Talking to a BSS correspondent, Lifshultz said few years ago he was confirmed that Zia had a long meeting with the then CIA station chief in Dhaka ahead of the carnage while the circumstantial evidence suggested the US intelligence agency had a hand in the episode.

Lifshultz, the former South Asia correspondent for the Far Eastern Economic Review who worked for prestigious news outlets like the The Guardian of the UK and the BBC, earlier talking to BSS correspondent Anisur Rahman said “Zia was the key shadow man” behind the August 15 putsch.

But his latest piece on Zia’s meeting with CIA’s Philip Cherry visibly shed a ray afresh on the episode which he said opened “a new chapter of an old story which has importance not only for Bengalis but also for Americans like myself”.

“Murders took place in Dhaka on August 15, 1975 . . . (but) There was a sequence of events that led up to those murders,” Lifshultz wrote in the piece titled “A Dhaka meeting precedes the coup d’etat”.

The US journalist said he knew a Bangladeshi businessman for decades together who had arranged that meeting at his house on a request by Cherry when their spouses too were present.

According to Lifshultz the businessman had many friends among the diplomatic community in Dhaka and he knew Cherry as a US diplomat, not as a CIA operative, who was operating a back channel without the knowledge of the regular embassy officials and the ambassador.

He had no idea why Cherry wanted to meet Zia either while the dinner took place a week before the coup and “It became clear as soon as both men (Zia and Chrry) arrived that they had things to talk about on their own”.

“All seemed innocent enough at the time. However, after the coup, as one family member put it, the host and his family felt they had been ‘used’,” wrote Lifshultz.

According to the US journalist had Zia opposed the coup d’etat “it could never have happened”.

“The evidence increasingly points to the fact that Zia was one of the principal architects of the coup and played a much more significant role than Khondaker Mustaque Ahmed,” Lifshultz said.

Khaleda should apologise to nation for fake birthday: Hasan 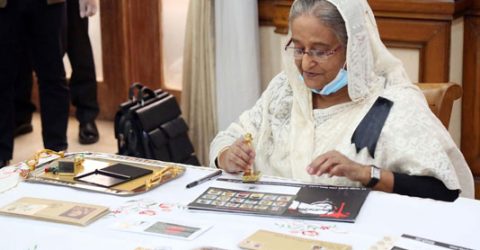