DHAKA,– Prime Minister Sheikh Hasina today asked the ministries to undertake development projects on a priority basis for implementation of the annual budget properly and accelerating the country’s uplift.

“The ministries will have to fix priority that which development schemes are needed first and accordingly, they will have to start the work of those projects,” she said.

In this connection, Sheikh Hasina directed the prime minister’s office (PMO) officials to monitor further the work of the ministries so that the work is done properly.

The prime minister was exchanging Eid greetings with officials of the Prime Minister’s Office (PMO) here this morning.

Sheikh Hasina said her government has made spending of budget money much easy. “There is now no hurdle like the past … you can do work if you want,” she said.

The prime minister said there is a good set up of officials in the PMO. “So they’ll have to increase oversee the work of the ministries so that the work is accomplished properly,” she said.

Sheikh Hasina also asked the officials concerned to launch the physical work of the development works immediately after receding of flood water in this season.

“You’ll have to finish paper work and plans first and then focus on starting physical work immediately after receding flood water this season,” she said.

The prime minister urged all to work more sincerely to keep up the country’s achievements. “The country’s GDP growth increased to 8.1 percent. However the speed of GDP growth becomes slow after the level and it’s a rule of the economy,” she said.

She continued: “So we’ll have to give more attention and labour and do more work … we’ll have to remain alert so that we don’t go backward.”

The prime minister stressed the need for revival of some pro-people programmes like ‘Ghore Fera Project’, Shanti Nibash Project’ and ‘Oboshor Project’ which were introduced during her previous governments.

“We had taken these schemes for the welfare of the people. But their tenure has expired. So we’ll have to re-launch the projects in the interest of the people,” she said.

While talking about her government’s steps for curbing corruption, the prime minister said those who take and give bribe both are equally guilty.

“We could accomplish many works fast, if steps are taken keeping it in mind,” she said.

Pointing out that the Anti-Corruption Commission is active, Sheikh Hasina put emphasis on focusing the issue of paying tax as per the income.

The premier put emphasis on keeping neat and cleans the houses, offices and their surrounding areas to effectively fight the dengue menace.

“We should be more careful about cleanliness of our surroundings to combat dengue menace as it was not only a mere problem for our country, but also for other countries,” she said.

Sheikh Hasina said dengue has turned into an epidemic in the Philippines forcing it to declare emergency.

In this context, she also said, “We should do our own duties without depending on anyone as we have the mentality of following the western world in case of many things. But, we are not habituated to follow them regarding cleanliness.”

Simultaneously, the premier asked the people particularly the dengue patients to follow all advises of the physicians such as taking liquid frequently and hanging mosquito nets while sleeping.

Without mentioning the name of Pakistan, she said, “We are now well ahead of that country against which we won (during the Liberation War in 1971) in terms of economic, social and political aspects that I have wanted.”

The premier said that the defeated forces of the Liberation War don’t want Bangladesh would stand with its head high in the global arena as an independent country as they wanted to run the country in line with the Pakistani ideals.

“But, we are moving fast towards development and progress with achieving 8.1 percent growth GDP due to the relentless work of the government (in the last 10 years) to give the people a better and beautiful life following the ideals of Father of the Nation Bangabandhu Sheikh Mujibur Rahman,” she added.

The prime minister said that Bangabandhu gave the independence of the country with an aim to present the deprived and exploited people a better life by building a “Sonar Bangla” making it free from poverty and hunger.

Describing the assassination of the Father of the Nation along with most of his family members as an attack on the independence rather on a family, she said, “It was primarily assumed that the attack was aimed at a family, but later it was clear that the heinous assault against the spirit of the Liberation War by the defeated forces of the great war.”

“We are now relentlessly working to build a poverty free country in line with the footsteps of Bangabandhu to achieve 8.2 percent GDP growth in this fiscal and double digit GDP growth in the future,” she said.

The premier urged all concerned to make efforts further to achieve the double digit GDP growth.

Stressing the need for knowing the diversity of nature, Sheikh Hasina said “It is true that flood brings immense sufferings for us but on the other side it is also a blessing … But we’ll have to turn the sufferings into a resource and take every step and plan in this regard.”

She said the government has been able to bring down the poverty rate to 21 percent. “We want to cut the rate further and our aim is to reduce it by at least one percent from that country which opposed our independence saying that the country will be turned into a bottomless basket after independence,” she said.

The prime minister said that country may be a developed one. “But we’ve to prove that we can and in this regard, this office (PMO) has a big role,” she said.

Extending heartfelt greetings to the PMO officials and employees on the occasion of Eid-ul-Azha, Sheikh Hasina appreciated the efforts of the law enforcers for peaceful celebration of the Eid. 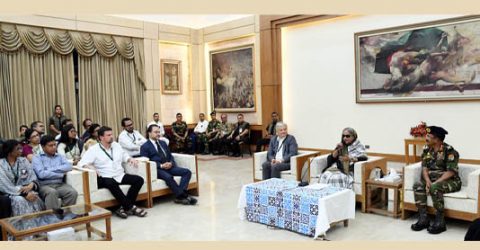 Govt to do everything for development of medical science: PM 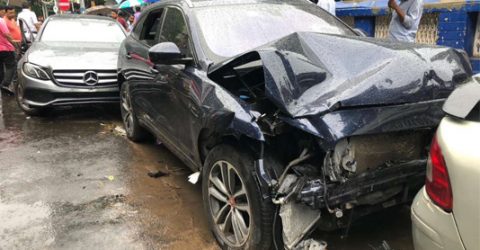