There has been certainly very notable improvement in power supply. When load shedding used to be awful during summer time some ten years ago, the agonies from load shedding have gone on progressively decreasing in recent years. In recent summer seasons, people in the country experienced much relief from load shedding compared to the past.

In the beginning when the present government took over, a number of quick rental power plants were set up to satisfy emergency needs. Later the regular plants have increased from 27 to 138 producing enough power to meet the total demand.

From 4,942 mw power production in 2010, total production of power has substantially increased to 23,548 mw at present. This has been a tremendous increase no doubt. Besides, government retains the capacity to produce a much greater amount of power if it wants to depending on demand.

Thus. from a situation when a potential subscriber had to wait years before getting a connection, nowadays miking is heard in some places of the country inviting subscribers to take connection at the soonest. Electricity coverage now includes 95 percent of the country’s villages with only 3 per cent left out.

But the experience in the power sector during recent years has been also something like two steps forward marked by a step backward . The benefit from producing additional power was seen curbed also by the intermittent breakdowns of the ageing machinery in the older plants. According to media reports most of the country’s gas-fired power generating plants have become too old and are unfit to properly utilize their allocated amount of gas. Thus, the gas at times had to be sent back for uses in other sectors.

So, it should be pretty obvious that the overhauling, repairs and maintenance of the older plants should be addressed with no less priority than establishing new generation capacities. If this is done, the benefits arising from new generation capacities will be sustainable as the total amount of power production will continue to rise from older plants not malfunctioning or operating efficiently and not breaking down frequently needing repairs. Thus, advances in the power sector will stand a chance of being consolidated.

The very old power plants in Bangladesh are seen retaining their operational life with relatively lower costs and their thorough overhauling would not involve amounts to be considered as prohibitive either, according to experts.

The older plants were generally set up in the seventies by the Russians and they can be invited to address the tasks of overhauling and repairing them. Not only the Russians have exclusive expertise in this field, they can be persuaded to do the works under their bilateral technical assistance programme or the cost may be covered by a long term and easy repayment loans from them.

No less important is to seek a comprehensive improvement of the transmission lines which are found to be rickety in many places. Power supply with efficiency and without waste can be ensured only through an efficient transmission and distribution system. There are other forms of system losses that should be also effectively addressed.

All kinds of power saving lights and equipment will have to be popularized. All of these activities –taken up actively under a planned framework– will contribute towards conserving power and guard against waste as the output of power will gradually go up from increased power generation. 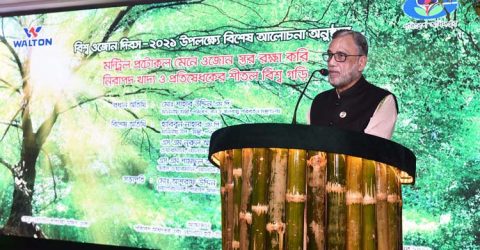