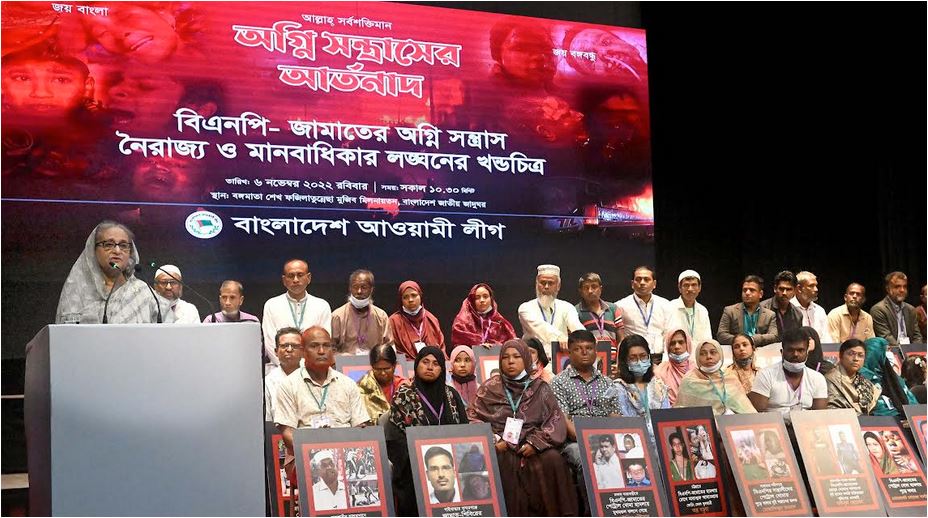 The victims of the BNP-Jamaat alliance’s firebomb and arson attacks in the name of movements during 2013-14, today demanded exemplary punishments to the masterminds and the perpetrators of the mayhem through trials.

“Please hold trial of all involved in the arson attacks in which many people including my husband were killed and numerous others injured,” Mafruha Begum urged the Prime Minister while sharing her agony of losing her husband Nuruzzaman Bablu and her 10 grader daughter Maisha in a BNP-Jamaat petrol bomb attack on a passenger bus in Chauddagram of Cumilla on their way back home from Cox’s Bazar.

Speaking at a programme titled “Woe of fire-terrorism: Partial scenario of BNP-Jamaat’s fire-terrorism, anarchy and human rights violation” organised by the Awami League at the National Museum auditorium, Shahbagh in the capital city, she also expressed her apprehension whether she could see the punishment of the culprits in her lifetime.

In the nationwide violence including arson and petrol bomb attacks carried out by the BNP-Jamaat clique from 2014 to 2015 in the name of so-called movement killed about 500 innocent people and injured over 3600 others.

Prime Minister Sheikh Hasina spoke at the function as the chief guest and inquired about the wellbeing of the victims of the BNP-Jamaat’s arson terrorism and anarchy and gave a patient hearing to their agonies and pledged to hold trials of the incidents and stand by them.
Information and Broadcasting Minister and AL’s Joint General Secretary Dr. Hasan Mahmud was present at the programme moderated by Asaduzzaman Noor, MP. 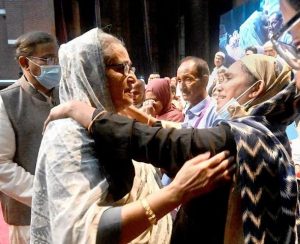 Mafruha Begum, who also suffered severe burn injuries in the petrol bomb attack, she said, “I could not sleep in whole night as I still hear screams of my daughter Maisha and see burning of the buses to ashes.”

She described the Prime Minister as her mother and said, “You (PM) can realise the pain of us as you have lost your near and dear ones.”

The women requested the Prime Minister to arrange a job for her only son so they can lead their lives.

Salahuddin Bhuiyan whose face and hands were severely burned in an arson attack at Konapara under Jatrabari police station on January 24 in 2013 on his way back home from office told the programme how he is living with immense mental and physical pains.

He said: “People usually fear me for my scary face. People are treating me like a madman and no one sits beside me on the buses. My face was quite well before the incident and then jobs were available for me. But, now I am rejected for jobs at every place due to my face.”

The man said he has two sons and a daughter and his sons are taking part in the HSC exam this year, urging the Prime Minister to arrange jobs for him or for his sons so that they can survive.

He said, “We need a leader like you (Sheikh Hasina). We don’t want government of the BNP-Jamaat anymore.”

A covered van driver Ramzan Ali, who lost his 14-year old son Munir Hossain in a petrol bomb attack in Gazipur by the BNP-Jamaat goons, also demanded trial of the incident and exemplary punishment of the persons responsible for burning his sleeping sons to death.

Runi Beum, mother of Nahid, who was killed in a petrol bomb attack on a passenger bus in the capital city’s Shahbagh area on November 28 in 2013, also demanded trail of the incident.

Advocate Khudeja Nasreen Akter, currently a lawmaker from the women’s reserved seat, who suffered serious burn injuries on the same attack, thanked the Prime Minister for making her a lawmaker and described how she survived the attacks by jumping out of the torching bus and got admitted to Dhaka Medical College Hospital with the help of a rickshaw-puller.

She added that she saw “a complete humanity” in the rickshaw-puller.

Describing the Prime Minister as their guardian, she said, “We all want punishment and trial of the BNP-Jamaat alliance. Souls of the deceased in the BNP-Jamaat arson attack will rest in peace and we who survived the attack will get satisfaction if the trial is completed.”

Rafiqul Islam, a truck driver who survived the barbaric petrol bomb attacks of the BNP-Jamaat’s terrorists in Dinajpur district and now living with severe burn injuries, described the attacks in an emotion charged voice and demanded justice.

“I don’t care what the BNP-Jamaat alliance thinks about me. I just want a trial of the Bangabandhu killings and arson attacks in which many people were killed and scores of others injured,” he added.

A photojournalist Abu Sayeed Tamanna of Chattogram briefly described that he was stabbed and beaten inhumanly while he was taking pictures of the BNP-Jamaat’s arson attacks.

He said he is still suffering from the pain and demanded immediate action against the culprits involved in the attack, adding that they are passing their days in panic as he feared the BNP-Jamaat alliance is currently heading towards anarchy in the name of movement.

The photojournalist said he wants healthy politics in Bangladesh.

Wife of BGB member Shah Alam, Nasrin Akter, wife of police personnel Bablu Mia, Josna Begum, wife of police constable Zakaria, Maya Begum and wife of police member Hazrat Ali, Laila Begum, described their miseries and questioned why their husbands were killed brutally and what were their crimes as they were only performing their professional duties.

They demanded immediate and exemplary punishment to the culprits and sought help from the premier to survive. 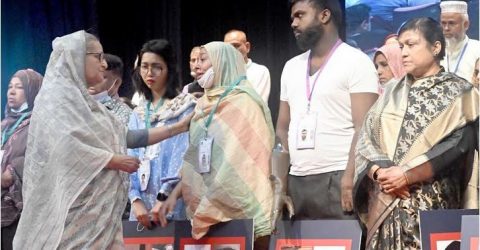 PM asks for vigilance against recurrence of 2013-15 violence 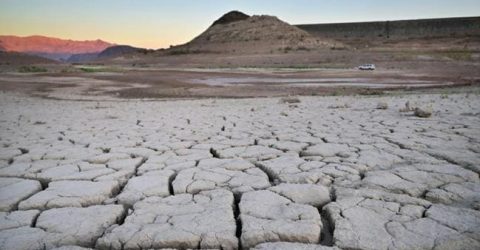