Bangladesh was ranked as the most corrupt country on earth in the list of corrupt nations published by Transparency International Bangladesh (TIB) on 18 October, 2005. This was the fifth year in a row that Bangladesh had topped the corruption perception index of TIB.

But the corruption issue continues to be overplayed by a section of media to imprint in voters’ mind as if the incumbent government in Bangladesh has been the most corrupt. But a reality check should prove things so differently. Nearly ten million new voters have become eligible to voters over the last five years. Many of them are probably not aware of BNP’s infamous record of corruption as they were young. Such lack of awareness or dimming of awareness may afflict a great many number of older voters too.

This is the problem. They are not well aware or have forgotten what BNP did in respect of corruption. They may wrongly think that the present Awami League government is exceptionally guilty for corrupt activities.Therefore, the objective sections of the media as well as the ruling party has a duty to correctly focus on things to put the voters in right perspective so that they can take their decision to vote with knowledge and hindsight in future elections.

Thus, it is irrefutably and statistically proved that Bangladesh’s corruptions have substantially decreased in recent years propaganda to the contrary notwithstanding. Nobody can expect a miracle or for wishing away corruption from the worst case status on corruption held by Bangladesh overnight or in a year or two. But TIB’s corruption rating on Bangladesh clearly established the gradual but optimistic falling of corruption in the country that was ranked once as the most corrupt in the world.

Boycotting of 342-day parliament working sessions out of 418-days by the then main opposition BNP led to wasting a huge amount of money. They created a record in the history of parliament remaining absent from businesses while they took all the financial benefits from the House. A total of Tk 104.18 crore was wasted due to quorum crisis in the 9th the parliament. This information was disclosed by Transparency International Bangladesh (TIB) on its research work titled “Parliament Watch .

Former advisor to the caretaker government M HafijuddinKhan was quoted in the report saying that the parliament was not workable only due to absence of political will. “There is no alternative to vibrant parliament except a strong opposition. It is obligatory for a vibrant parliament to remain present and to make it the focal point of all matters with the object of establishing good governance”, he opined. Hafij also said this type of culture of boycotting parliament was unparalleled and embarrassing as well as disregarding the rights of people.

In the published report everything about reviewing of the businesses of 9th parliament, the activities of parliament members and the role of the parliamentary standing committees, observation of the role of the members in framing laws were analyzed.

The information gathered either directly or indidirectly means it contained the number of working days, quorum shortage and the presence of the members, leaving out sessions, walk out, role of the Speaker, speech of the President, budget discussion, question session, public importance notice related matter, passing of bill, point of order, speeches of the ministers, basic information of the standing committees, general discussion and the parliamentary behavior of the members.

But that achievement could not continue due to long absence of the opposition members. The report said that the rate was 34 percent in boycotting parliament by opposition in the 5th parliament. It increased to 60 percent in the 8th parliament and in the 9th parliament it made a new record of 82 percent breaking all past records.

These are issues that our people or voters will need to ponder in the future before they are asked to electorally decide who should lead the nation in the next decade. 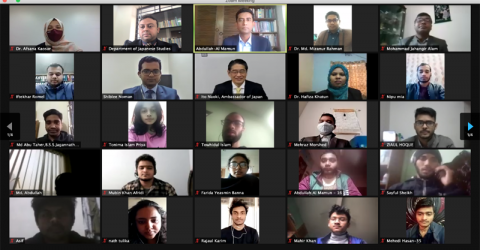 Seminar on study in Japan held at DU

Seven pillars on which to grow GCC-China partnership
Latest