BNP is another name of people’s mistrust: Quader

DHAKA,  – Awami League General Secretary Obaidul Quader today said BNP is another name of people’s mistrust as the shout of the party’s movement is merely a luxury.

He came up with the remark while addressing a press conference on contemporary issues at his official residence in the capital. Responding to a statement of BNP, Quader said: “In fact, subordination is the tool of BNP, which always looks for undemocratic ways to assume state power. The BNP is a subordination-friendly party that does not follow its own constitution”. He said those, who seek help from foreigners in words and do not have the courage to go to people, are the real henchmen.

The ruling Awami League wants to build this country as a self-esteem and prosperous one with the spirit of the Liberation War, but to the contrary, the BNP wants to turn Bangladesh into a subordinated and failed state, he said.

Quader, also road transport and bridges minister, said these thoughts of the BNP are nothing, but bombs of words. BNP leaders always find crises all over the country, but they do not see any crisis in their politics, he said, questioning “Can the sky be covered up with palm of the hand? The BNP leaders are seeing everything with their fragmented eyes”.

The AL general secretary said taking the people away, the policy of flattery in leadership is now the politics of BNP as its leaders do not have the courage to speak the truth. He said the poor politics of BNP has pushed it at the edge of a deep ditch and that is why the BNP leaders are yet to realise this reality. Quader said Bangladesh is advancing fast, at an indomitable pace, under the leadership of Prime Minister Sheikh Hasina, while there is no shadow of crisis in the ongoing trend of development and prosperity of the country.

Noting that the BNP’s politics is disgraced by people today, he said those, who do not read the language of the people’s mind and their eyes, are gradually losing the people’s trust. Replying to an allegation of BNP about corruption, the road transport minister said the BNP had institutionalised graft in the country and opened a control room of looting and irregularities at Hawa Bhaban.

During the BNP’s era, he said, the country got stigmatised becoming the world champions in graft five times in a row and now the BNP leaders are talking about corruption, which is a matter of shame. Quader said the current government is conducting cleansing operations in various sectors and taking administrative, legal and organisational actions against those involved in corruption and irregularities. “The Bangabandhu’s daughter has been able to show this courage only. Will the BNP be able to show such example?” he questioned. 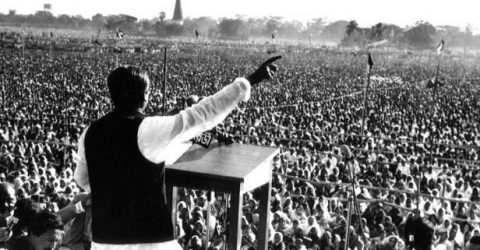