“Necessary steps would be taken after considering all aspects of the area…Illegal, unsafe and risky chemical godowns will be shifted soon after taking coordinated steps,” he told the reporters after visiting Churihatta area in the city’s old part where a devastating fire took place on Wednesday night.

Quader said the government is committed to shift chemical godowns to safer places in a collective way keeping in mind the previous mistakes, if any.

He said now the government’s first priorities are taking steps for the funeral of the deceased, giving proper treatment to the injured persons and to find out the missing people. Steps would be taken to evict the risky buildings, he added.

The AL leader said the government has no disorientation after the tragedy. “I visited the place with the concerned ministers as per the directives of the prime minister,” he added.

Quader said, “Prime Minister Sheikh Hasina has visited the Burn Unit of Dhaka Medical College and Hospital to see the injured persons. She is monitoring all after the incident and gave directives to give logistic supports to the concerned.”

He said the government of Prime Minister Sheikh Hasina has extended all types of assistances after the tragedy. Three investigation committees were formed. Steps would be taken after getting reports and completing the rescue operation, the minister added.

Replying to a question, Quader said steps would be taken to shift all chemical godowns from Churihatta at present as it is a very congested area. Later, the eviction programmes would be launched in other areas of the city’s old part in phases.

He said a committee has been formed to look into the matter of using substitute in vehicles instead of cylinder gas. 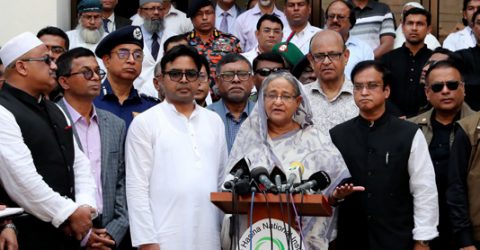