DHAKA  – February 23, a red-letter day for Banglaee nation as five decades ago in 1969, the people of Bangladesh bestowed ‘Bangabandhu’ title on Sheikh Mujibur Rahman who later led the nation to attain freedom through supreme sacrifices made by Bangalees in the Liberation War in 1971.

The then Dhaka University Central Students’ Union (DUCSU) Vice-President and Sarbadaliya Chhatra Sangram Parishad Convenor Tofail Ahmed announced the title on behalf of the people at a mass rally after Sheikh Mujib,
subsequently the father of the nation, was freed from jail in the Agartala conspiracy case on February 22.

“On the basis of historic 11-point movement, we freed Bangabandhu from Pakistan jail on February 22 through a mass-upsurge. As a mode of gratefulness, the Chhatra Sangram Parishad, on behalf of the nation, conferred Bangabandhu title on Sheikh Mujibur Rahman on February 23,” Tofail, who was DUCSU VP in 1968-69 term, told BSS in an interview.

Recalling the event, a veteran Awami League leader Tofail said: “I chaired the function as the DUCSU VP and I addressed before Bangabandhu. I had said we are conferring Bangabandhu title on the leader who spent his youth in
Pakistani jail and who wanted to embrace death on the stage of gallows in smiling face.”

Since then, the greatest Bangali of all time has been known by that title which, in Bangla, means the friend of the people.

Tofail, a seasoned politician and parliamentarian, said on January 17, 1969, the movement (mass-upsurge) “We had initiated from the Dhaka University Kala Bhaban (Arts Faculty Bhaban), in which Asad, Matiur, Makbul Rustom and
Sargent Zahurul Haque in cantonment and Rajshahi University Proctor Professor Shamsuzzoha embraced martyrdom through which we were able to free Bangabandhu from jail.”

“Under the leadership of Bangabandhu, we won the 1970 general election and subsequently he had led the Liberation War to attain the independence for the country in 1971,” he said.

The former minister said Bangabandhu had spent most of his youthful days, 13 years, in the jail of Pakistan for the emancipation of people. No other leader made such sacrifices for the people.

“I felt proud of saying that we could implement both of our two slogans– freeing Bangabandhu and freeing our mother land Bangladesh. On February 22, we freed our loving leader Bangabandhu who subsequently became father of the nation and on December 16, we liberated the country under the leadership of Bangabandhu” he said.

Bangabandhu, who was arrested on May 8, 1966, was put on trial as the main accused in the Agartala conspiracy case in 1968 which subsequently triggered the 1969 mass upsurge, actually the rehearsal of the Liberation War.

The movement initiated on January 17 while the Parishad called a meeting on that day despite the Police placing section 144 during the autocratic rule of Ayub Khan, the president of Pakistan.

“During the movement, Asad was killed on January 20, On January 24, Motiur, Makbul, Rustam and Alamgir embraced martyrdom,” he said.

Tofail said they took an oath holding a public rally at Paltan on February 9, 1969. “We had taken oath saying we will free Bangabandhu and we will free our mother land Bangladesh,” he added.

On February 15, Sergeant Zahrul Huq, an under-trial prisoner in the Agartala Conspiracy Case, died of bullet injury in the Dhaka Cantonment and on February 18 Prof Samsuzzoha was killed.

On February 21, 1969 the Parishad gave a 24-hour ultimatum to the then Pakistan government to free Sheikh Mujib unconditionally and he was eventually released on February 22.

“Around a million people raised their hands in unison at a grand public rally at Suhrawardy Udyan (the then Race Course Maidan) on February 23, 1969, and conferred the title of Bangabandhu on Sheikh Mujibur Rahman,” Tofail
said. 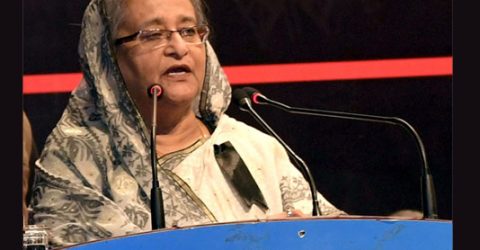 None would be able to destroy Bengali culture: PM