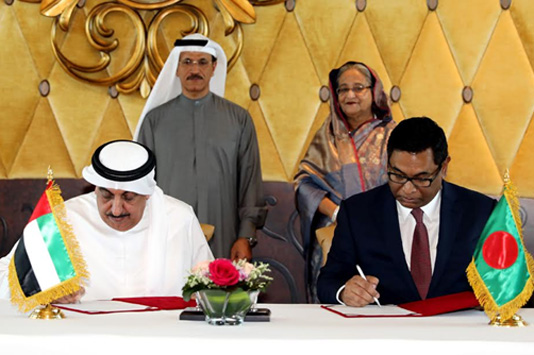 ABU DHABI  – Bangladesh and the United Arab Emirates (UAE) here on Sunday signed four memorandums of understanding (MoUs) to promote relations between the two countries in the areas of investment, business and power sector.

The instruments were inked after a meeting between Prime Minister Sheikh Hasina and a 15-member UAE business delegation led by Minister for Economic Affairs Sultan al Monsuri.

“The MoUs gave focus on development of port, dry port and energy, creating new door in the areas of investment and business, which we never seen before,” Foreign Secretary Md Shahidul Haque said while briefing reporters after the meeting at Hotel St. Regis.

The first MoU was signed between the Government of Dubai and the Public Private Partnership Authorities of Bangladesh for construction port, dry port and industrial park. Chairman of DP World Sultan Ahmad bin Sulayem and Secretary of the Shipping Ministry Abdus Samad inked the instrument.

The second MoU was penned between Emirates National Oil Company (ENOC) and Ministry of Power, Energy and Mineral Resources of Bangladesh for long time supply of LNG to Bangladesh and developing a land-based LNG receiving terminal.

State Minister for Power, Energy and Mineral Resources Nasrul Hamid and Group CEO of ENOC Saifd Al Falasi signed the MoU under which the LNG receiving terminal would be constructed in Payra on 300 acres of land and supply of LNG to provide required natural gas delivery to support power and other industries in Bangladesh.

The third MoU was inked between Bangladesh Power Development Board (BPDB) and Sheikh Ahmed Dalmook Al Maktoum Member of Ruling Family of Dubai on investment in the power and energy sector of Bangladesh.

Chairmen of BPDB Khaled Mahmood signed the MoU from Bangladesh, under which an integrated 800 MW-1000 MW LNG power plant would be constructed in two phases along with implementing a 100 MW solar power project.

The fourth MoU was inked between Bangladesh Investment Development Authority (BIDA) and Sheikh Ahmed Dalmook Al Maktoum Member of the Ruling Family of Dubai to set up a special economic zone in Matarbari with an aim to promote FDI and enhance bilateral economic relations between the two countries.

Principal Secretary to the Prime Minister Office Md. Nojibur Rahman signed the MoU for BIDA, the foreign secretary said, adding that UAE Ruling Family wanted 300 acres of land to set up a company for investment.

Haque said the business delegation expressed interest to come up newly in Bangladesh with business and investment in various sectors particularly on energy, port and industrial zone.

The UAE economic minister also proposed for orgazining a Joint Business Forum to focus on Bangladesh’s business opportunities, potentials and market and emphasized formation of a Joint Economic Commission for reviewing the business relations on regular basis.

The chairman of DP World wanted to expand their business in Bangladesh, the foreign secretary said.

Sheikh Ahmed Dalmook al Maktoum of UAE Royal Family also mentioned about his visit to Bangladesh and progress of the discussion for investment in energy, solar energy and construction of LNG power plant.

He informed the prime minister that they would visit Bangladesh again and keen to invest in a bigger way. They requested for organizing Business Forum in different cities of UAE.

Haque said the prime minister welcomed the UAE business leaders and assured them of giving all support.

The foreign secretary said: “We never witnessed such an interest among the UAE government and business community to come with huge investment in Bangladesh.”

“Through the agreements, a new door will be opened up in the areas of investment and business, which we never seen before,” he added.

“So far we approached and tried to pursue them to come to Bangladesh with investment, but now I witnessed a keen interest from them to invest in Bangladesh,” he said. 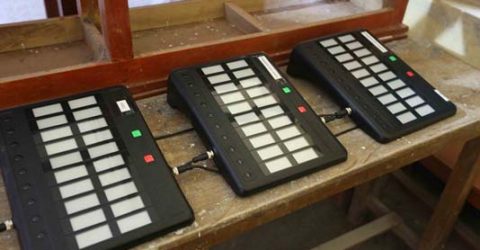