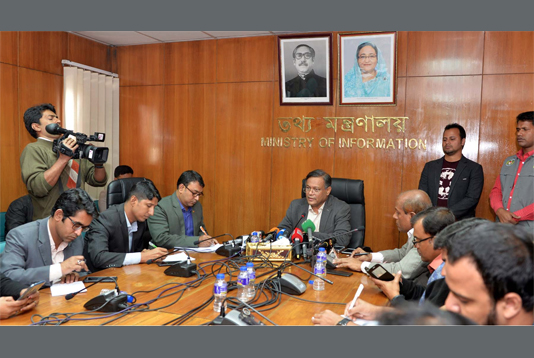 “The TIB published the report to insult the state as well as the people of the country through blind criticism and to collect foreign fund,” he told a press conference at his secretariat office here.

TIB, the Bangladesh chapter of the Transparency International (TI), shared the findings of the global survey, which indicated graft was rising in Bangladesh, at a press conference recently.

Hasan, also the publicity and publication secretary of Awami League, said the government rejected the report and hoped that the Anti-Corruption Commission (ACC) would take necessary steps to this end.

The TIB didn’t seek apology till now as their report on the Padma Bridge was faulty, he said, adding they (TIB) also published a report on the recently held 11th parliamentary election though they had no observer in the polls.

The minister said the TIB made the reports through some persons, businessmen and some committees where around 80 percent was BNP’s statements.

He said now the TIB published another report to insult the countrymen and to give a political agenda to the opposition party. “We definitely think that the report is fully politically motivated,” he added.