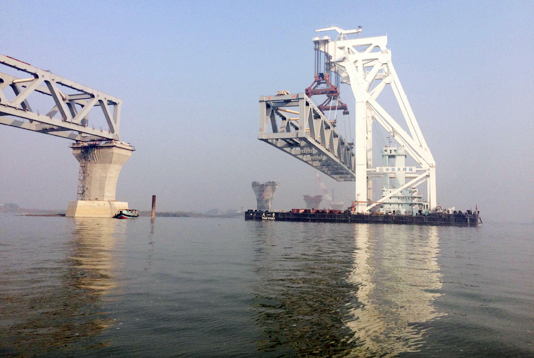 MUNSHIGANJ  – The seventh span of the 6.15-kilometre Padma Bridge was installed on the 36th and 37th pillars of the bridge at Zajira point in Shariatpur today.

“The sixth F6 span was installed around 10am at Zajira point making a total of 1,050 meter visible of the main structure of the mega bridge,” executive engineer of the Padma Multipurpose Bridge Dewan Abdul Quader told BSS here.

He said 900 meters of the bridge were visible at Zajira point with the installation of the sixth span and one was installed at Mawa point making 150 meters visible.

The F6 span has been successfully placed on the pillars with the efforts of local and foreign engineers.

Abdul Quader said that engineers along with others technicians started to work on this span in the morning and they installed the span on the basis of their previous experience.

According to experts, the national economy is expected to witness 1.2 percent GDP growth rate, while 0.84 percent poverty will be reduced every year after completion of the bridge to be built at an estimated cost of Taka 30,193.39 crore.

The fourth span was positioned on May 13, after two months. After one month and 16 days, the fifth span was installed on June 29.

According to the engineers concerned, a total of 41 spans will be installed on 42 concrete pillars to complete the bridge. 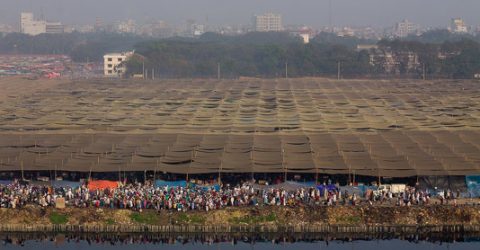 Ijtema to be held in February: Home Minister