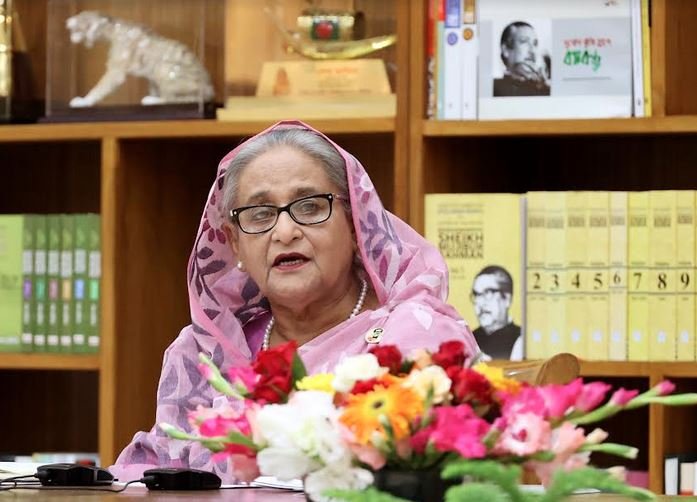 Prime Minister Sheikh Hasina today assured the countrymen that there is nothing to be worried as Bangladesh’s economy is in a quite strong position.

“Bangladesh’s economy, in terms of midterm and long-term aspects, is at no risk. I can ensure all of you that there is nothing to worry,” she said.

The premier made this assurance while addressing a press conference about the outcome of her recently concluded official visit to the United Kingdom and the United States of the America.

Mentioning that the government has put concentration on making the economy vibrant overcoming all challenges, she said that they’ve given emphasis on the issue of mitigating people’s sufferings of any kind.

She said, “There is no issue to worry…if we all think that this is our country and we all together have to pull the country ahead.”

Sheikh Hasina said that in the USA she urged the expatriate Bangladeshis to convey her messages to their respective near and dear ones at home to ensure the maximum utilisation of their every inch of land and produce whatever they can.

She said whenever Awami League (AL) comes in power it pulls the country ahead. “So, I can say that we will be able to achieve the target of overall economic indicators.”

“But, our people have to remain conscious,” she added.

Besides, she said that there is nothing to be worried about the foreign exchange reserves because in 1996, AL government started journey with US$ 1 billion in reserve, while at that time, electricity generation was 1,300 megawatts, food shortage was 4 million metric tons and the literacy rate was only 45 percent.

The premier said, “I can promise that there is no risk in Bangladesh in any case.”

She said that it is true that Awami League could not come to power in 2001 only for domestic-foreign conspiracy due to non-provision of gas sales to foreign countries. “But if it had done so, it would not have been possible to continue electricity transmission even with some load shedding today, the country would have plunged into darkness.”

After assuming power, she said, the AL government has opened up every sector to the private sectors.

Sheikh Hasina said that she has confidence and trust in the people and that is why they have taken the decision.

At the beginning of the press conference, the premier read out a written statement regarding her engagements in the UK and the USA.

In the written statement, she said during her stay in the UK and New York from September 15 to 24, she took part in the funeral of Queen Elizabeth II in London and the 77th United Nations General Assembly (UNGA) alongside nine high level meetings and side events.

“Bangladesh had actively participated in all the important meetings in the UNGA which made the country’s position stronger on the multilateral forums. I also hope the participation will further enhance the international cooperation regarding issues of Bangladesh’s interests. I think Bangladesh’s participation in this UNGA session is successful on the whole.”

Regarding the Russia-Ukraine war, sanction and counter sanction, prime minister  said not only the people of Bangladesh rather people around the whole world are suffering.

She said that inflation has increased, prices of every essential items have been increased and developed countries also are struggling.

She requested all to utilize every inch of land for producing something whatever that is.

In this regard, Sheikh Hasina requested all to take preparation from right now.

“We have our people, we have very fertile lands, let not any land uncultivated, and produce whatever you can and maintain austerity in using everything including power and water. We have to work wisely considering our future,” she said.

Replying to another question, Sheikh Hasina, also the president of ruling Awami League, expected that all parties will participate in the upcoming parliamentary elections.

She said that the issue of (joining) election is the decision of the political party – which will participate in the election and which will not.

“We can’t impose anything here. To do politics, the parties will decide,” she said, adding, “Yes, we definitely want all political parties to participate.”

The premier said that they want all parties to come and participate in the elections and shows who has what qualifications.

Highlighting the contribution of Awami League in the development of the electoral system in Bangladesh, she said that the improvements and reforms of the elections in this country have been made by the Awami League and its grand alliance.

“What should we do if no one comes there? (They) Don’t come because of the fear of losing; it will not happen anymore that everyone has to be invited to feed,” she added.

BNP has forgotten their past, Sheikh Hasina said, adding BNP was created from the pocket of a military dictator and then the farce of the election was their creation.

“We’ve taken the election to the people rather,” she said, mentioning that they have developed the system of the voter list with pictures and transparent ballot boxes so that people can cast their votes.

She wondered how BNP could ask the people to vote for them as they burnt people, killed people by throwing bombs and throwing grenades. “If they (people) come forward and ask them (BNP) look at my situation; how could BNP respond them? That’s why they are going to the foreigners instead of own people.”

Replying to the another question, the Awami League chief said her party’s triennial council will be held in December next and the party started taking preparations for the 12th parliamentary elections to be held late 2023 or early 2024.

She said now AL is perhaps the only party in the country that abides by its charter always.

The premier said she has been following this principle since the party made her its  president from 1981.

“It is true, it has been a long time. I must want new leadership will come to the party,” she said.

She said Bangladesh has become a developing nation as the Awami League is in power for a longer period since 2009.

“I had a target to transform Bangladesh into a developing country. The country became a developing one prior to the celebration of the birth centenary of Father of the Nation Bangabandhu Sheikh Mujibur Rahman in 2020 and golden jubilee of the country’s independence,” she said.

About the sanction on RAB by the USA, the Prime Minister said the Rapid Action  Battalion  (RAB) was formed at the recommendation of the USA.

The USA has also provided the force  with everything such as training, arms, helicopter, and even digital and ICT system.

“When the USA imposes sanctions and raises allegation, I would like to say one thing that they (RAB) have conducted their activities in the way it (USA) trained them,” she said.

The Prime Minister said they have curbed terrorism using the RAB and raised a question whether the USA is unhappy for that.

She questioned what the imposition of the sanction on them means and said it means supporting the terrorists.

The Prime Minister said Bangladesh has ensured punishment to those who commits offences whether they are the members of RAB, police and other law enforcement agencies.

But in the USA, they do not mete out punishment to the policemen who deal with people as per their wish, referring to killings over a silly matter that included putting hands into pocket and carrying toy pistols.

The USA even killed many Bangalees there, she said. “I told them these things clearly,” the Prime Minister said and added that she said she never bows down to any pressure.

About the allegations forced disappearance of the people, the premier said the military dictator and also founder of BNP Ziaur Rahman introduced the politics of killings and disappearance.

Zia had killed hundreds of armed forces officials and leaders and activists of the Awami League and their relatives even did not get their  bodies.

Fugitive criminals and children of the war criminals and Bangabandhu’s killers are now on the hot pursuit to carry out propaganda against the country and thus tarnishing the image of the country on the world stage.

About current relations with the USA, the premier said they always follow “Friendship to all, malice to none” as formulated by the Father of the Nation.

She said there might be ups and downs in the relations.

Replying to a question on Rohingya repatriation, the Prime Minister said they are trying their best to resolve the issue through talks as Bangladesh never wants war rather peace.

She said the UN is sincere to resolve the issue, but the military junta of Myanmar does not pay heed to the UN.

The premier said various organisations of the UN are extending cooperation to support the Rohingyas.

She said the ASEAN has also worked to resolve the crisis, but nothing was achieved.

The premier said the Rohingyas are destroying the ecological balance of Cox’s Bazar and engaging in illegal drug and arms peddling in camps. 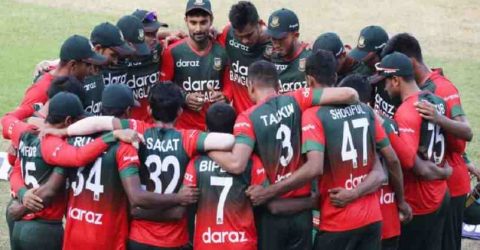