Nakibul Ahsan Nishad, JnU Correspondent
Severe crisis of classrooms at Jagannath University (JnU) are hampering teaching activities. Faculty members and students of some departments are continuing their educational activities by borrowing classrooms from other departments. At the same time teachers of some departments are sharing the same room. They think that this crisis will become more evident after the admission of students in the 2020-21 academic year.

The university currently has six faculties, two institutes and 36 departments. But it has a shortage of classrooms. Although the departments have their own classrooms, they are less than required. There are at least 10 semesters in each department but there are a maximum of two or three classrooms. As a result, students of other semesters stand at the door of that classroom before the end of the class of one semester. It disturbs the minds of the teachers and students in the classroom and also makes the students at the door feel uncomfortable.

Meanwhile, the work of the new academic building was completed but no new department was shifted there. There used to be six classrooms on the ground floor of the ‘Rafiq Building’ of the university before the closure of Covid-19 pandemic. Department of Statistics shared two rooms and the Department of Mathematics, Department of Chemistry, Department of Botany shared one room each. It also had one seminar room. Later, the ground floor of this very building was renovated to a modern medical centre, counselling center and registrar’s office were set up on one side. As a result, the university currently has only one classroom in the Department of Statistics and Botany. According to the students of the Statistics Department, the number of classrooms remaining after the office of the Registrar’s office is only one in two classrooms on the ground floor of Rafiq building. There is only one classroom for the five batches of the department. In this one classroom, it is becoming impossible for them to conduct classes of five batches. Participation in regular classes and exams is disrupted. In addition, there is only one toilet for more than four hundred students in the statistics department. There is also a nominal lab, where no more than 20 students can take classes and most of the computers are broken.

The university’s utility building has three departments – Music, Theatre and Fine Arts. All three departments are facing the same issues. The students said that they have to face several problems during the practical classes. At present eight batches are being studied at the same time including the current masters and new batch in Theatre while the classrooms of the department are only four.

If one batch is taking the lab class then another batch cannot take the regular class. Even if there is a class schedule, it gets cancelled. Again, in all the theoratical classes, there is a lack of space in the class. Besides, teachers of three departments are sharing the same room. Water enters the classroom during the rainy season along with the classroom crisis of the Public Administration Department. Besides, the plaster is falling off the wall. There is not enough room for teachers in the department. The Department of Islamic Studies has more than one classroom for teachers but only one classroom for students. The other two rooms are used for the open library. In case of an emergency, students have to borrow classrooms to take classes.

“Our classroom crisis is at an extreme stage,” said Shams Shahriar, chairman of the Theatre department. In this regard, the convener of the University Room Allocation Committee and Treasurer Professor Kamaluddin Ahmed said rooms would be allotted. We are trying to solve it. Resolving this crisis is not an overnight issue. On January 5, we had a meeting with the Deans and Chairmen. After noon we don’t have many department classes. At that time I was thinking that classes of other departments could be given in those classrooms. The Vice-Chancellor has given instructions in this regard. 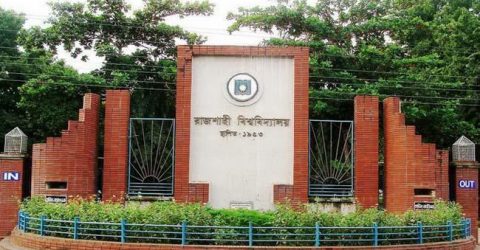