After visiting the spot, it can be seen that Md. Didar Hossain has cultivated two varieties of watermelon on the same land on the advice of the Department of Agriculture.

The Deputy Assistant Agriculture Officer Shamimul Haque Shamim has given him regular guidance starting from collecting improved seeds. The seeds were planted experimentally in only 20 acres of land. Watermelon flowers and fruits come within 55 days of planting. At present he has about 600 watermelons. Some weighs 1 kg and 2 kg. The weather was favorable and after 15-20 days he could collect watermelon and sell it in the local market.

This watermelon production was done by Md Didar Hossain using natural fertilizer. He used pheromone traps and yellow color tap methods to kill insects. He did all this on the advice of the agriculture office. It has cost him about Tk 30,000 rupees so far. At present, watermelon is being sold at a wholesale price of Tk 60-70 per kg. And it is being sold in the retail market at 90 rupees. In the hope of gaining the right amount of profit, the smile on the face of the teacher, Md Didar Hossain, is getting longer.

Md Didar Hossain said I am cultivating different crops including paddy. I was looking for an alternative income. At this time I could know the relationship between watermelon cultivation in Macha. After that I cultivate this watermelon with untrained training. Because of this I have spent about 30 thousand taka so far. I will be able to sell watermelons in a few days. If the production continues like this, I hope I will have a profit of at least one lakh rupees after deducting all the expenses.

Meanwhile, farmers and other people from the area are coming to him (farmer Md. Didar Hossain) every day to see watermelon cultivation. He further said that hard work will pay off. His little land has bumper yields of Sagor King and Gold Crown varieties of watermelon. This crop grown on the advice of the Department of Agriculture is now a dream of many more farmers in the upazila.

Habiganj Agriculture Extension Department Deputy Director of Agriculture Md Tamiz Uddin Khan said that success has come in the cultivation of Sagar King and Golden Crown watermelon. It is hoped that the interest of farmers in watermelon cultivation will increase day by day. And we have given all kinds of advice to the farmers to grow non-toxic watermelon. 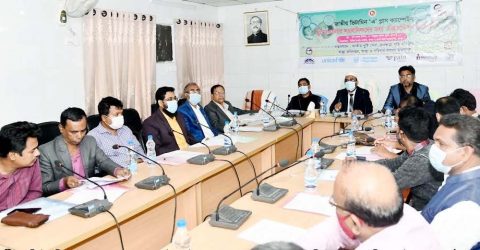 Call to make vitamin A plus campaign a success