Bangladesh calls all to recognize Palestine with rightful place in UN 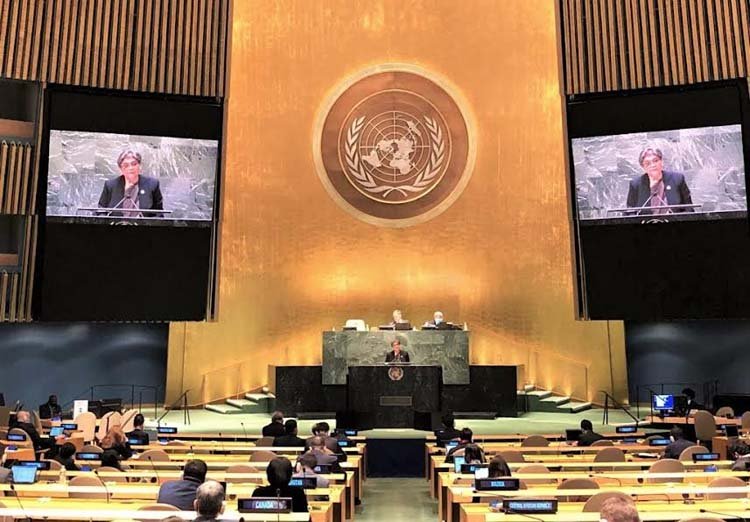 DHAKA,  – Bangladesh has called upon the international community to act in a way to achieve a just, lasting, comprehensive and peaceful solution to the Palestine question through recognizing an independent State of Palestine with rightful place in the United Nations (UN).

“The international community must make genuine efforts to address the root causes of the Palestinian crisis, and put an end to the Israeli aggression,” Said Bangladesh Permanent Representative in the UN Ambassador Rabab Fatima. She was speaking at the plenary meeting of the United Nations General Assembly on the agenda item- Question of Palestine on Wednesday, according to a message received here today.

Ambassador Fatima reiterated Bangladesh’s unwavering and steadfast support to the just cause of the people of Palestine for an independent, viable, and sovereign Palestinian State, with East Jerusalem as its capital, under a two-state solution based on the pre-1967 borders. She referred to the deteriorating situation in occupied Palestinian territory due to demolitions and seizures of homes and structures, and expulsions, forced displacement and bloodshed of Palestinians by Israeli occupation forces.

Ambassador Fatima said that these were blatant disregard to UN resolutions and international human rights and humanitarian law. The Bangladesh Ambassador said that the culture of impunity must end and the perpetrators of the atrocity crimes committed against the Palestinian civilians in the Occupied Palestinian Territory must be held accountable.

She welcomed the ongoing independent, international commission of inquiry to investigate these crimes and also the developments in the International Criminal Court in this regard. She commended the work of UNRWA and emphasized on addressing the urgent humanitarian needs of the Palestinians including the COVID-19 recovery related needs while urging the international community to increase its support to UNRWA.