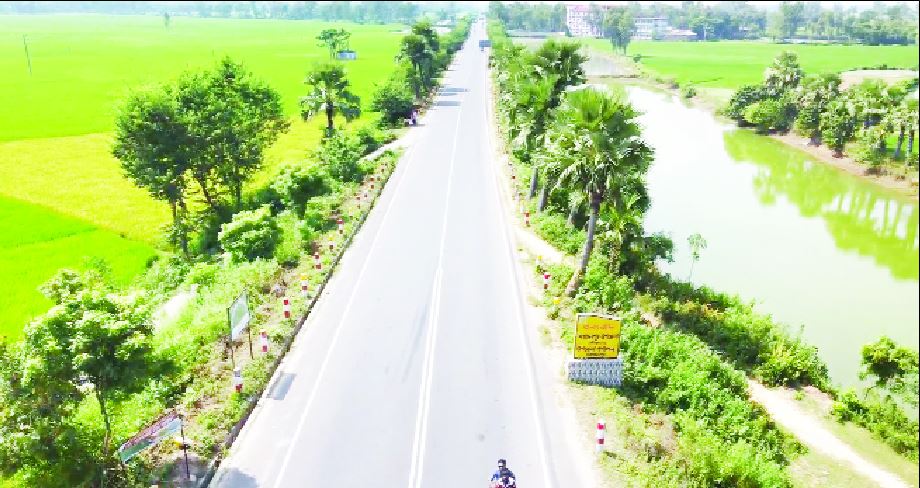 M R Rocky, Naogaon Correspondent
Along the 73 km Naogaon – Rajshahi road, beautiful flowers are spreading eye-catching beauty. Cars are running on the smooth road is reaching the destination at the desired time. This is a dream road after the end of various miseries. The implementation of 73 km Naogaon-Rajshahi road development project at a cost of Taka 439 crore has brought a radical change in the agriculture and economy of Barind region.
According to the locals, the communication system in the northern districts has taken a step forward in ensuring proper market system of agricultural products in the development of this road.

The agro-dependent Naogaon district produces 2.6 million metric tons of paddy and about 4.5 million metric tons of mangoes in four seasons of the year. Marginal farmers seek city markets to get fair prices for their crops. With the development of balanced infrastructure of Naogaon-Rajshahi road ensured, the distance between rural and urban areas has been reduced, creating a unique example of communication.

The Naogaon-Rajshahi road is of great importance for various purposes including transportation of goods in this agricultural district. The locals feel that the 73 km road reform has had a positive impact on the socio-economic transformation of the region.
It is to be noted that the road development work started in 2017 and ended on June 30 last. The two-and-a-half-hour journey on this new road has been shortened and the divisional town has been connected with the district residents in a quarter of an hour.