Rajbari Correspondent
An executive engineer of Bangladesh Water Development Board (BWDB) in Rajbari, who was caught on camera assaulting a junior colleague, has been shunted out. The action was taken against Abdul Ahad, the executive engineer, on Wednesday, after the video went viral on social media.
Abdul has been attached to the training and human resources wing of the additional chief engineer’s office of BWDB in Dhaka, according to an order issued by the board’s deputy secretary (administration), Syed Mahbubul Haque.

In the video footage, Abdul can be seen verbally abusing and physically assaulting deputy assistant engineer Mohammad Rony in his office. A man who was present there at the time, can be seen trying to intervene. After the assault, Rony sent a written complaint to the chief engineer of BWDB. “Rony refused to carry out my order. I lost my cool and assaulted him. I admit my mistake,” Abdul said. 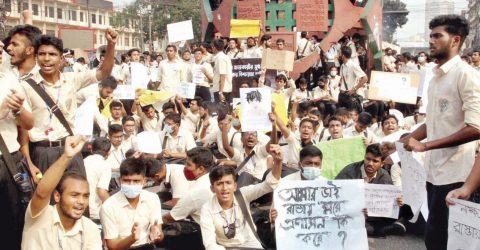 Daytime traffic jams in capital due to students protest