Another batch of Rohingya moves to Bhasan char voluntarily

Safiul Alam, Cox’s Bazar
Seven buses carrying 256 displaced Myanmar nationals from 127 families have left for Chattogram from Cox’s Bazar camp to Noakhali’s Bhasanchar.
The buses left Ukhia Degree College ground at 11:30 am on Wednesday, said Additional Refugee Relief and Repatriation Commissioner Md. Shamsud Douza Nayan. However, he did not confirm how many Rohingya would be taken in the seventh phase. On December 4 last year, the relocation of Rohingyas from the Cox’s Bazar camps to Bhasanchar in Noakhali began for the first time. So far, a total of 18 thousand 334 Rohingyas in six phases. So far, the government has relocated a total of 18,334 Rohingyas in six phases.

After lengthy discussions, the United Nations High Commissioner for Refugees (UNHCR) signed a memorandum of understanding (MoU) with the government on October 9, agreeing to be involved in the relief efforts for the Rohingya in Bhasanchar.

For the first time since the MoU was signed, another group of 256 Rohingya from 126 families has left for Chittagong to relocate to Bhasanchar. Last year, the government decided to relocate 1 lakh Rohingyas from Cox’s Bazar shelters to Noakhali’s Bhasanchar. With this, before last December, the government completed the construction and preparation of all the infrastructural facilities including accommodation for the Rohingyas in Bhasanchar.

Shamsud Douza said “a convoy of buses carrying Rohingyas left for Chittagong on Wednesday morning in the first phase of the seventh phase from Ukhia Degree College ground to be shifted to Bhasanchar from various Ukhia-Teknaf shelters. Arrangements will be made to take these Rohingyas to Bhasanchar after reaching Chittagong. 256 Rohingyas from 127 families from different refugee camps in Ukhia and Teknaf have left for Chattogram in seven buses.”

“A temporary booth has been opened on the campus of Ukhia Degree College for Rohingyas interested in volunteering to visit Bhasanchar. The names of Rohingyas willing to go there voluntarily are being registered. Arrangements will be made to take those who are interested to go to Bhasanchar. ”
Therefore, it is not possible to say exactly how many Rohingyas will be taken in this phase, said the Additional Refugee Relief and Repatriation Commissioner.

Shamsud Douza said the buses carrying Rohingyas bound for Chattogram had vehicles guarded by police in front and behind them. In addition, several vehicles carrying government officials involved in the process of relocating Rohingyas to Bhasanchar have also left.
From Tuesday night, Rohingyas who wanted to go to Bhasanchar from different asylum camps were brought to Ukhia Degree College Camp. This activity has been going on since morning. In this regard, strict security measures have been taken for the members of the law enforcement agencies besides the intelligence surveillance in the surrounding areas including the Ukhia Degree College campus. 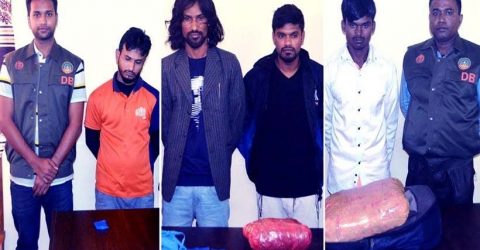