KUALA LUMPUR, June 8, 2018 (BSS/AFP) – Being labelled by the UN a sanctions-busting front for North Korea would prompt most companies to adopt a lower profile — but military equipment supplier Glocom is refusing to take
the hint.

UN experts last year outed the formerly Malaysia-registered provider of battlefield surveillance and communication equipment, but arms control experts have pointed out that the company is continuing to promote its wares
on social media and its website.

Typically, companies that are identified as fronts in North Korea’s drive for hard currency quickly disappear, sometimes resurfacing later in a new guise in what has been described as an international game of whack-a-mole.

But Glocom has posted frequently on Twitter in recent weeks about its products, including Friday.

Andrea Berger, a London-based researcher with the Middlebury Institute of International Studies who tracks such activity, said on Twitter it was unusual for such companies to remain so visible.

She said it may be due to a desire to stick to an established brand name. “Glocom is obviously betting on the fact that prospective customers won’t actually do their due diligence and spot the negative coverage of Glocom. They could be right,” she wrote.

“And/or this is a giant middle finger.” In another post, Berger said: “@TwitterSupport, you probably want to think
about closing the account of a North K orean intelligence-run front company selling military equipment. You’re welcome.”

A UN panel of experts last year singled out Glocom in a report alleging that North Korea was routinely circumventing trade bans and banking restrictions — invoked as punishment for its nuclear and missile programmes — by resorting to middlemen and a complex web of front companies abroad.

The report said at the time that Glocom was a Malaysia-based front company operated by Pyongyang’s intelligence agency that sold North Korean-made military communications equipment to Eritrea, with suppliers in China and an
office in Singapore.

Glocom did not immediately respond to AFP requests for comment via social media or sent to a company email.

Glocom sells communication radios, radar, and surveillance equipment ranging from handheld devices to larger items that can be mounted on tanks, aircraft and ships.

Several are promoted on Glocom’s website in digitally-animated videos set to thumping soundtracks.

The website says Glocom provides products and services for “countries and organisations around the world that safeguard territorial integrity and struggle against aggression and war”.

It said it had “about 200 engineers, employees and managers” in 2017. But customer value may not be a top priority, according to the UN report.

It said North Korea “procured relatively inexpensive components for the purpose of assembling and selling very expensive” equipment, citing an $8,000 radio still advertised on Glocom’s website that was made with cheap
materials. 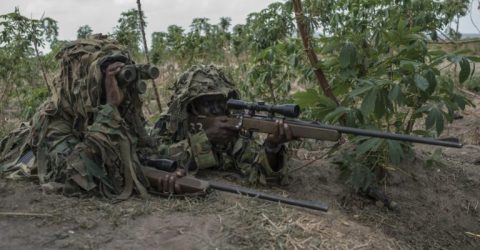 US, North Korea: face-to-face after decades of tension