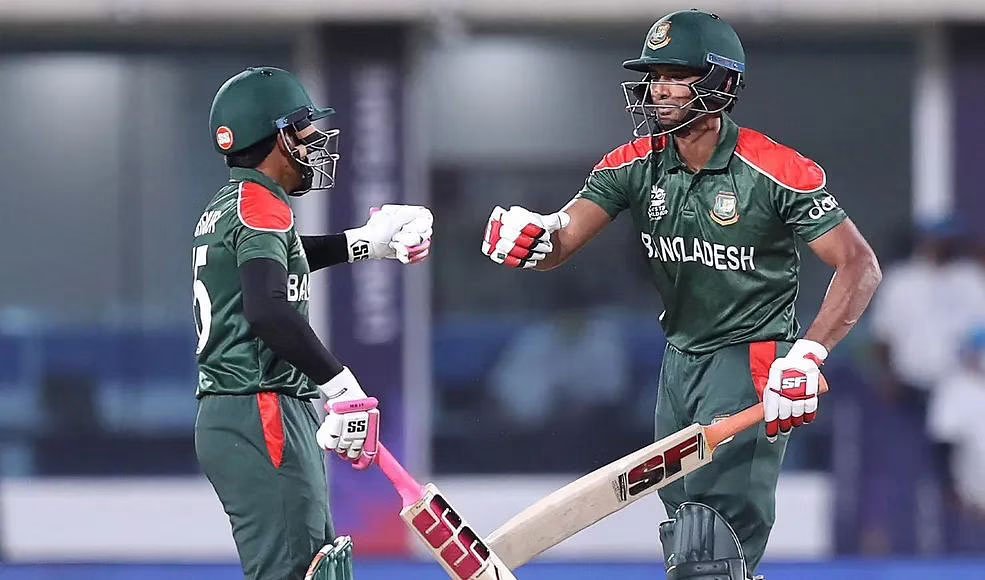 DHAKA, -A ruthless performance saw Bangladesh thrash Papua New Guinea by an overwhelming 84 runs, their highest margin victory in this format– to confirm the Super 12 of Twenty20 World Cup. Bangladesh lost their first match to Scotland by six runs before making a huge turnaround with a clinical victory over Oman and PNG.

Those two victories bolstered their net run rate also, raising a prospect of being the champions of Group B should Oman beat Scotland in the next game. At Al Amerat Cricket Ground in Muscat today, the Tigers exactly did what they needed to do to make them in favourable position in their group. And the senior players-Shakib Al Hasan and skipper Mahmudullah, who had to face the wrath after the shocking defeat to Scotland, led the way.

Shakib Al Hasan finished with 4-9, equaling Shaheed Afridi’s record of 39 wickets as the highest wicket-taker in T20 World Cup, before hitting a 37 ball-46 while Mahmudullah Riyad cracked a sublime 28 ball-50. Thanks to their performance and the contribution from the other batters helped Bangladesh rack up their highest World Cup total of 181-7 and then the bowlers dazzled with Shakib to wrap up PNG for 97 in 19.3 overs.

Before this crushing victory, Bangladesh’s largest -71 runs –victory was against Ireland in Belfast in 2012 and their biggest World Cup victory was by 54 runs against Oman in 2016 T20 World Cup in Dharmashala, India.

Mahmudullah struck three fours and as many sixes in his knock, which was his sixth half-century in this format. After opting to bat first, Bangladesh again lost an early wicket with opener Naim Sheikh being out on a half-volley delivery of Kabua Morea for duck. Liton and Shakib then steadied the innings with 50-run partnership, which was only broken after the former played a loose shot to be dismissed. After being out cheaply in the last two matches, Liton Das finally made 29 off 23 with one four and one six in this game.

But senior player Mushfiqur Rahim continued his bad patch to be out on 5 as Bangladesh appeared to be faltered. Mahmudullah and Shakib brought the side back in contention with free flowing batting against a bowling attack that was not strong enough. Nevertheless PNG showed great spirit on the field as they took some brilliant catches to stun Bangladesh.

Shakib Al Hasan was one of the Bangladeshi batters to be victimized by stunning catch as Charles Amini ran hard from long-on and dived forward to take a low catch. This superb catch deprived him his half-century for the consecutive second match. Shakib smacked three sixes for his 46 off 37, following his 29 ball-42 against Oman. Mahmudullah kept the side rolling and crashed Chad Soper’s delivery to backward point for four for his sixth half-century off only 27 balls. But soon after that he mishit a high full toss delivery of Damien Ravu and offered a catch at deep square leg.

The third umpire checked it for no ball but gave a verdict of clean delivery. Even The screen showed mistakenly ‘not out’, creating confusion but later it was fixed. After the dismissal of Mahmudullah, Mohammad Saifuddin and Afif Hossain played some big shots to post 181-7, eclipsing their previous highest of 180- 2 against Oman in 2016 T20 World Cup in India.

Saifuddin clobbered two sixes and one four in his 6 ball-19 while Afif scored 21 off 14. Kabua Morea, Assas Vala and Demien Ravu picked up two wickets apiece for PNG. The inexperienced PNG batters were no match for the highly experienced Bangladesh bowlers. They crumbled at the very outset in the chase of big total with Saifudding opening the gate, dismissing Lega Siaka for 5 in the third over.

Taskin Ahmed removed Assad Vala who edged a moving delivery to wicket-keeper Nurul Hasan Sohan. Shakib then appeared in the stage, bowling four overs in a row to take the game away of the PNG by claiming four wickets.

He took the scalp of Hiri Hiri for his fourth and in doing so, equaled Shahid Afridi’s 39 for highest wicket-taker in T20 World Cup. One more wicket will help his go past Afridi and he is surely getting the chance in Super 12. After Shakib’s quota, PNG were reduced to 29-7, that threatened them to be bowled out for lowest total (Netherlands 39 against Sri Lanka in Chattogram in 2014) in T20 World Cup history.

However Kiplin Doriga resisted and rescued the side from the ultimate shamble. Doriga was stranded on 46 off 34 with two fours and two sixes as PNG failed to play full 20 overs. Mohammad Saifuddin and Taskin Ahmed grabbed two wickets apiece to complement Shakib’s 4-0-9-4. 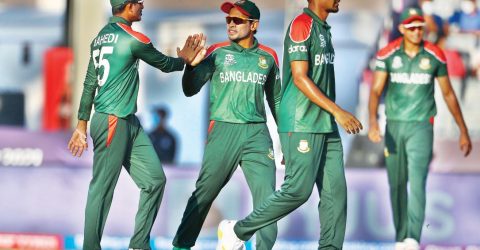