Jagannath University will not have a Playground ? Nakibul Ahsan Nishad
Jagannath University started its journey in 2005 as a completely non-residential university. After becoming a university, the halls of the college period were evicted. Now the only playground is going to be in the hands of City Corporation. Where there was only one field in the crowd of not getting hundreds, it is no more. Meanwhile, the students have been protesting for the protection of the field, but there has been no administrative progress. The question for students then is will there not be a playground in a public university?

It is learned that last June, Dhaka South City Corporation (DSCC) took initiative to build a market at the central playground of Jagannath University. On June 17, the university authorities sent a letter to the South City Corporation fearing the construction of a market on the playground of Jagannath University. Later, when met the city mayor, he was assured not to build any facility in the university playground. At that time the poles were removed from the playground. But late Sunday night the whole field was surrounded again. City Corporation’s contractor removed the field goalposts and boundary walls. Meanwhile, the university administration says that although the city corporation initially promised not to build a market in the field, now the mayor is not talking. Now letters will be sent from the university to various departments to protect the field. If this is not resolved then alternative measures will be taken.

According to university sources, in 1984, then-President Hossein Mohammad Ershad verbally allowed the then government Jagannath College (now the university) to use one-third of the open-air playground as the students did not have their own playground. Since then the ground has been used as the central playground of the university. The first convocation of Jagannath University was also held at this ground.

After that, the general students held a human chain in front of the central Shaheed Minar of the university at 12 noon. Asaduzzaman Raju, convener of the field protection movement, presided over the program. Many more including Shakil, Gazi.

At the same time, the speakers said that even if the university is to keep the university, the field has to be restored, if there is no field, the students will lean towards drugs. Until we go to the new campus, we want to use the incense field. At this time, the students warned, you have a lot of places to loot.
You also looted money for mosquito repellent. Get rid of the evil thoughts of students by occupying the playground. Students will respond appropriately to maintain their field authority.

At the end of the human chain, the students marched around the campus. The procession later entered the Dhupkhola ground through Victoria Park, Laxmibazar and Katherpool in Old Dhaka. There, the City Corporation stopped the ongoing work and observed the location program.

While the students were in the field, Gandaria Police Station Officer-in-Charge Saju Mia visited them. “We were on patrol when we got the news,” he told reporters. The students protested peacefully.

Students aged above 12 to be inoculated in cities: Dipu Moni 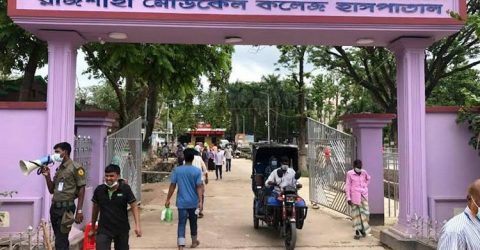