DHAKA – The cabinet today approved a proposed agreement with New Delhi enabling the neighbouring country to use Chattogram and Mongla ports for goods movement to and from India.

“The weekly cabinet meeting with Prime Minister Sheikh Hasina in the chair at her office gave the approval,” Cabinet Secretary Md. Shafiul Alam told a media briefing at Bangladesh Secretariat.

Alam said the agreement would allow India to use Chattogram and Mongla ports to carry goods to their North Eastern states in a very short time.

“The draft suggested the agreement to be effective for five years with a provision of auto renewal for another five years (while) either of the countries could cancel it giving six month notice,” he said.

But, Alam said, under the agreement only Bangladeshi vehicles and vessels would be used to carry the goods inside Bangladesh. “Primarily the agreement will be signed between Bangladesh and India and Nepal and Bhutan can also
join the pact,” the cabinet secretary said.

He said the neighbouring country, however, would have to follow the international rules and General Agreement on Tariff and Trade (GATT) as well as Bangladeshi laws and rules in carrying the goods.

The agreement suggested Bangladesh’s tax authorities would take bond equivalent to duties and taxes from Indian companies while charges, fees and carrying cost will be charged according to GATT principle in addition to
regular duty and taxes.

“A major objective of the proposed agreement was to strengthen the existing cordial bilateral ties,” Alam said.

The company would be called Bangladesh Smart Electrical Company (BSEC) Ltd to produce smart meter and other electrical goods with authorized and paid up capitals worth Taka 50 crore and Taka 28.60 crore respectively.

The cabinet secretary said the WZPOADICO with 51 percent share of the company will provide Taka 14.58 crore while Chinese company will give Taka 14.02 crore as capital.

The meeting Okayed as well a proposal to ratify an amendment to the OIC Charter suggesting its summit to be held in every two years instead of existing three years.

The meeting witnessed the approval of drafts of Bangladesh Public Administration Training Centre (BPTC) Act, 2018 and National Curriculum and Textbook Board Act, 2018 replacing two related ordinances promulgated in 1984
and 1983 respectively by the then military regime.

Alam said the BPTC Act, 2018, was formulated without major changes except in the formation of its Board of Governance structure which suggested inclusion of the public administration minister and state minister in the
body as ex-officio members.

The NCTB Act, 2018, however, brought some changes in the previous ordinance, recognizing it as a statutory body under the Secondary and High Education Division. “During its functioning, the Board, however, will follow
the directives and instructions to be issued by the government from time to time,” the cabinet secretary said.

The draft suggests the NCTB to comprise nine members instead of existing five including its chairman with specific responsibilities over textbook printing and publication, primary education, secondary and higher secondary
education, madrasa education, vocational education, curriculum training, curriculum research and evaluation and finance.

It suggested a new provision obligating the Board to submit its annual report to the government on March 31 every year.

The law entrusted the board with the task of publishing books for small ethnic groups in their mother languages in addition to publication and approval of the interactive books.

At the beginning of the meeting the Prime Minister unveiled the logo of National Skills Development Authority.

The cabinet also adopted an obituary reference expressing profound shock and grief at the death of ABM Abdus Samad, a valiant freedom fighter and an accused of Agartala Conspiracy Case. 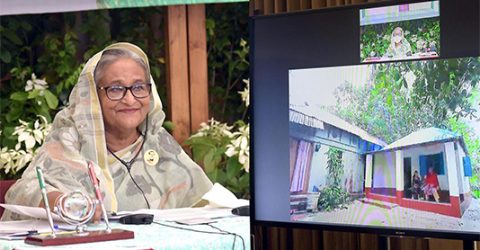