Shafiqul Islam
Another set of Metro Rail coaches has arrived in Dhaka. On June 1, the coaches at the two barges reached the jetty near Diabari, which was ready to unload the coaches. Then on Wednesday the coaches were unloaded from the barge in the morning and taken to the Metrorail depot in Uttara, Dhaka Mass Transit Company Limited (DMTCL) sources said. After being brought to the depot, 19 types of second set trains will be tested.
The second set of train coaches set sail from the Kobe seaport of Japan on April 21. It reached Mongla seaport in Bangladesh on 9 May. After completing the ancillary works, the vessel left for Dhaka by river on May 24.

At first it was anchored in the river. If two barges stand together at the jetty, the movement of other vessels on the river will be disrupted. The coaches were unloaded from the barge at 8 am. Wednesday. He also said that these were taken to the project depot in Uttara.
Earlier, on April 21, the first set of Metrorail trains arrived in Dhaka. On May 12, the train ran 500 meters inside the Uttara depot. Through this Bangladesh entered the era of electric train.

It may be mentioned that, the six lines of Metrorail are being constructed in and around Dhaka under DMTCL. The cost of the project has been estimated at around Tk 22,000 crore. The overall progress of the project is 63.26 percent. 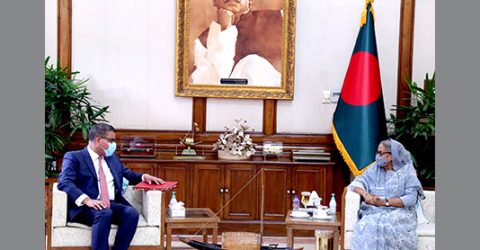