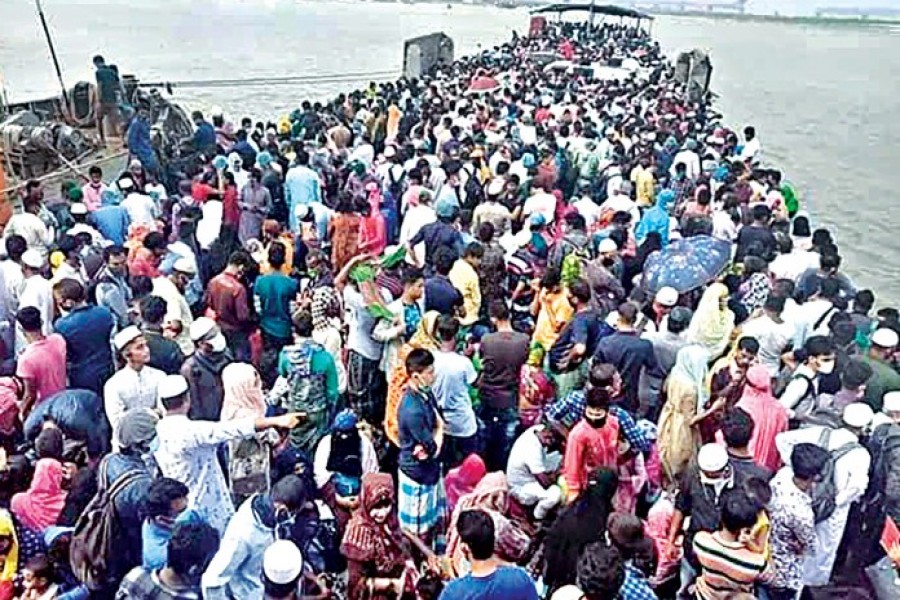 Rafiqul Islam, Shibchar, (Madaripur) Correspondent
To curb the transmission of coronavirus a limited number of ferries are in service on the Banglabazar-Shimuliain land water route. This has caused the homebound people to crowd the Banglabazar ghats.

On Sunday (May 9), it was seen on the spot at Banglabazar Ghat, almost all the ferries were anchored at the Ghat. However, from 9:30 am to 11:30 am at two ferries named Faridpur and Shah Paran anchored into the port the entire ferry was overflowing with passengers except some vehicles onboard. It is estimated that there were about 5,000 passengers in the two ferries. The health rule as well as social distancing was completely ignored.

On the other hand, from 7.30 am to 9.30 am, two ferries named Cumilla and Kunjulata from Banglabazar Ghat area were seen leaving the ghat with some ambulances and about 500 passengers. However, till midday 10,000 people and about five hundred vehicles are waiting to cross.

According to BIWTC’s Bangla Bazar Ghat sources, no other vehicles are taken on the ferry except for urgent needs. However, people get on the ferry from side to side. They are not going to be controlled in any way.

The bus service is off, there are a few microbuses. Besides, there are three-wheelers. Passengers brought with their families have come to see the dearth of the car.