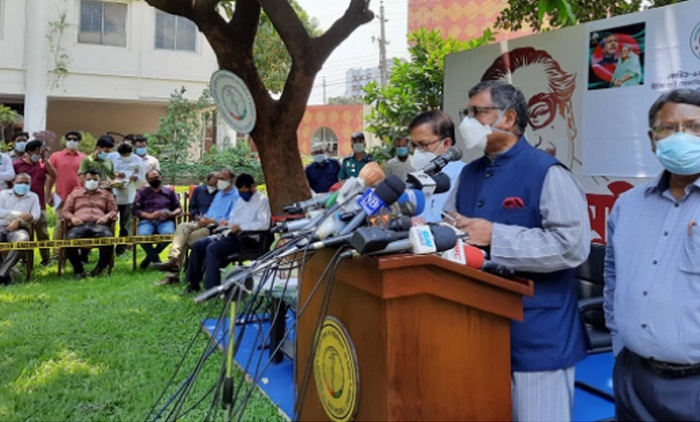 He was speaking as the chief guest at a discussion meeting on “Public-Private Preparation and Emergency Oxygen Management to Cope with the 2nd Wave of Covid-19” organized by Bangladesh Private Medical Association through online zoom app on May 6.

The health minister said the country currently needs 60-70 tons of oxygen for both general and covid patients. According to him, “at the peak of the second wave of coronavirus infections, the maximum oxygen demand was up to 210 tons. At present, the country has a daily oxygen production capacity of 220 to 230 tons. However, our neighboring country India is currently in a dire situation due to the oxygen crisis. We need to be aware that the same situation does not happen in our country at any time. The government has been asked by the health ministry to take some urgent steps, including a lockdown, to prevent such a catastrophe. The Hon’ble Prime Minister has also made a number of announcements, including 17 emergency directives during the Covid period. If the people of the country follow the urgent instructions of the government and do not go for reckless movement, shopping, travel ahead of the upcoming Eid, it is hoped that even if the 3rd wave of Corona comes to the country, Bangladesh will be able to deal with it well.”

Regarding oxygen management in the hospitals of the country at present, the Health Minister said, “Oxygen plays a key role in covid treatment when the patient is in a bad condition. That is why Central Oxygen system has been introduced in 130 government hospitals of the country very fast. Through these 130 hospitals, about 18,000 beds of oxygen bed covid patients are now being treated.

People are now receiving covid treatment in 100 ICU beds of Dhaka North City Corporation. More than 100 ICU beds are being set up there soon. These initiatives will make a huge contribution to the treatment of covid in the country.”

Regarding the vaccine, the Health Minister said, “Although we have an agreement with India’s Serum Institute for 30 million doses of vaccine, not all the vaccines are available as per the agreement due to the current dire situation in that country.” However, the government’s talks with Russia to get the vaccine are in the final stages. “We will have an agreement with Russia soon. In addition, China is delivering 500,000 vaccines by May 12. We have talked to the Chinese government. A decision on China’s vaccine will come soon. At the same time, we are in touch with countries other than India that are producing the AstraZeneca vaccine. All in all, it is hoped that the vaccine crisis will end soon” the minister said.

State Minister for Relief and Disaster Management, Enamur Rahman joined the meeting as a special guest and said that more people need to be vaccinated to control corona. All departments of the government are active in enabling the government to import vaccines quickly.