While everyone in the virtual world is as busy as anyone, there are some people who are running endlessly to change the society. It’s a lot like eating your own buffalo in the forest. I will hear the story of such a man today. Who is working day and night to enlighten the society in the light of
books. For the last one decade, he has been delivering books by ferry to people’s homes. Delivering books from village to village, city to port and wherever you can. He continues to run with the light of civilization in the same rhythm everywhere including schools-colleges, mosques-temples, roads-ghats, hats-bazaars. He is a book lover, Harun ar Rashid, like a peddler of light. A banker by profession.

Although a banker, he is a book-loving man from head to toe. If you want to see his indomitable love for books, you have to go to Nawabganj near Dhaka. Although this book lover was born in Gobaria village of Kuliarchar upazila of Kishoreganj, he passed his post graduation from a private university and is currently working at Grameen Bank in Nawabganj. That is where he built the paradise of his book. The little house is just wrapped in a book cover. Numerous books arranged him. Is that so? Everywhere you look in the room, there are books and books. There are so many books, are they just for fun?

He smiled a little in response to the words. Gave a surprising information. He has collected this book day after day with great difficulty by saving the daily market cost. Not just for yourself. To spread the light of civilization among the people around. I heard many more stories from this book lover. There is no end to this man’s madness with books. As he used to find his childhood in the scent of the pages of a book, now he can find his lost childhood in the pages of a book. There is no end to his work with offline or digital media books. He has created a storm online by writing reviews of hundreds of local and foreign books through various social media. There is no end to the thoughts of this enterprising man in promoting the book or trying to spread the word about the book. 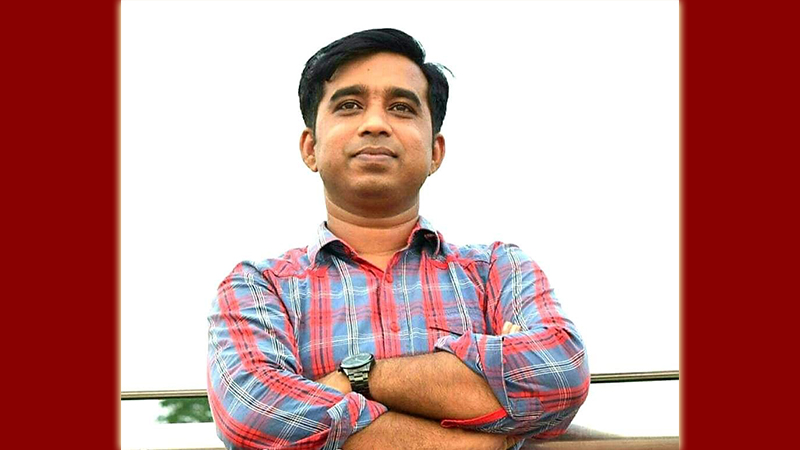 The speed of his work does not stop only through digital, the work of this book-loving man seems to be even better offline. Going from house to house, going from house to house in the city, he is delivering books to the people on his own initiative. At the end of the week, he is bringing old books with new ones. His great work did not stop even during the epidemic. At the risk of his life, he has delivered the book to people of all classes and professions under the hygiene rules. With the violence of YouTube, Facebook and other online social media, children and teenagers, young and old alike are addicted to the virtual world. In order to bring these people back to the world of books from the virtual world, books are being handed over to everyone irrespective of class or profession.

Although it may seem unbelievable at first glance, in reality it is the true story of a book lover who is busy spreading the word about books in a fancy way. He is constantly working to make the young society book-oriented. He is handing over books to drug addicted youth instead of drugs. Incredibly bringing these young people involved in drugs back to the world of books. In the last ten years, he has brought more than two hundred young people back from the world of drugs to the world of books. The boy who used to pick up drugs in the middle of the night, the boy who used to spend sleepless nights in the frenzy of drugs, is getting books in his hands today. The drug addicted boy spent the night and is now addicted to books. By reducing online addiction to drugs, he is bringing a large part of the youth back to the realm of books. This book- loving man, who is constantly running, is working day after day with the torch of civilization in his hand, tirelessly. He dreams of a civilized society.

With this goal in mind, he is also making an outstanding contribution in building libraries in disadvantaged remote areas of the country. Open libraries are being set up in different regions with the money given by the rich people of the society. He is also promoting the book in various saloons and tea-coffee shops. This book lover has one more identity. Not only is he a great reader, he is also a writer. Not to mention, the one who cooks also ties his hair. A thriller published at the 2020 book fair received a huge response from the readers.

The ‘Eskaponer Tekka’, published during the epidemic coronation, has already earned the reputation of a best seller. He has a lot of dreams about books. Asked about his dream, he said, ‘I want the world to be a book’. Let every man’s house be the paradise of books. Not  smartphones, but decorative books in the hands of young people.

Amend laws that discriminate against men