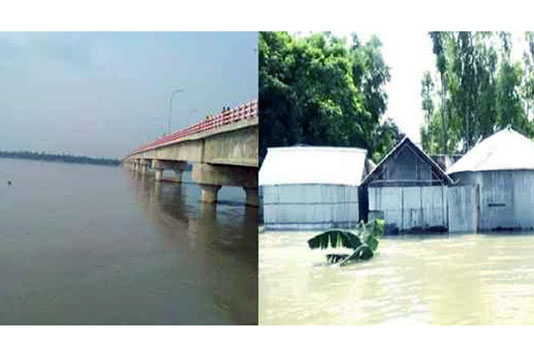 RANGPUR, – The Dharla crossed its danger mark as major rivers marked sharp rise following onrush of huge water amid monsoon rains from the upper catchment in the Brahmaputra basin during the last 24 hours ending at 9am today.

“With sharp rise in its water level during the period, the Dharla was flowing 20cm above the danger mark (DM) at Kurigram at 9 pm today,” Executive engineer of Kurigram division of Bangladesh Water Development Board (BWDB) Md. Ariful Islam told BSS.

BWDB officials said water levels of all major rivers marked sharp rises following onrush of huge water amid moderate to heavy monsoon rains from the upper catchment in the northeastern India states in the basin during the last 24 hours till at 9 am today.

The rising trend in water levels of major rivers might continue during the next 48 hours with a possibility of creating a temporary flood-like situation in the very low-lying and char areas for a shorter period.

Moderate to heavy monsoon rains are likely to shower at places in northern Bangladesh and adjoining northeastern Indian states during the next couple of days.

According to a bulletin of the Flood Forecasting and Warning Center (FFWC) of BWDB issued today, the recorded rainfalls during the past 24 hours till 9am were 248mm at Cherrapunji, 79mm at Pasighat, 51mm at Jalpaiguri and 42mm at Gangtok points of the northwestern Indian states.

Besides, 180mm rainfalls were recorded at Gaibandha and 51mm at Dinajpur, 25mm at dakia and 19mm at Kawnia monitoring points of BWDB during the same period in the downstream of the basin.

Due to huge onrush of water from the upstream, water levels of the Dharla sharply rose by 38cm at Kurigram, Ghagot by 30cm at Gaibandha, Brahmaoutra by 30cm at Noonkhawa and 27 at Chilmari points during the last 24 hours till 9am today.

Besides, water levels of the Teesta rose by 17cm at Dalia and 9cm at Kawnia, Jamuna rose by 23cm at Fulchhari, 29cm at Bahadurabad, 21cm at Sariakandi, 15cm at Kazipur and 8cm at Sirajganj points in Sirajganj during the period.

The Dharla was flowing above the DM by 20cm at Kurigram while Brahmanpara below the DM 100cm at Noonkhawa and 73 at Chilmari, Ghaghot by 102cm at Gaibandha while Teesta below the DM by 23cm at Dalia and 38cm at Kawnia points at 9 am.

The Jamuna was flowing 83cm below the DM at Fulchhari in Gaibandha, 87cm at Bahadurabad in Jamalpur, 65cm at Sariakandi in Bogura, 54cm at Kazipur and 77cm at Sirajganj points at 9 am today.

While talking to BSS, Chief Engineer for Rangpur Zone of BWDB Jyoti Prosad Ghosh said water levels of the Dharla, Teesta, Brahmaputra and Jamuna rivers might continue to rise further during the next 48 hours in the basin.

“However, there is no possibility of any major flood and we are closely monitoring the situation and ready to take immediate steps on an emergency basis anywhere, if necessary, in all eight districts of Rangpur division,” he said.