Unremitting rise of water gets flood situation worse in Rajshahi 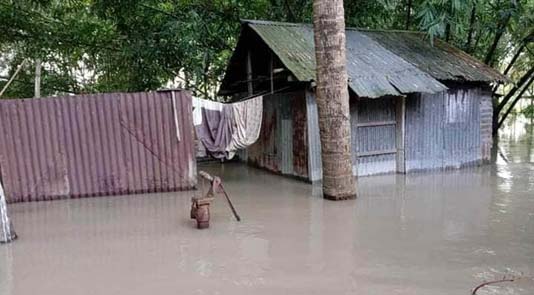 RAJSHAHI,  Incessant rise of water level of the most rivers in the Ganges and Brahmaputra Basins, triggered by heavy downpour and onrush of water from upper catchment for the last couple of days further worsened the flood situation in the region.

Water level in the existing rivers of the two basins rose at 40 points, receded at 18 points and remained stable at two points which further aggravated the flood situation in the char (river bed) and other low-lying areas.

Local office of Bangladesh Water Development Board (BWDB) has recorded a rising trend of water levels in almost all points like Pankha, Rajshahi, Hardinge Bridge and Talbaria Goalunda in the past 24 hours ending 9 am today, said Mukhlesur Rahman, Superintending Engineer of BWDB.

Water level of the Ganges River increased by 14 centimetre (CM) at Pankha in Chapainawabganj, 10 cm at Rajshahi, five cm at Hardinge Bridge and 12 cm at Talbaria points while the level in the Padma River increased by five cm each at Goalunda, Bhagyakul and Mawa.

But the Ganges River was flowing 183 cm and 171 cm below the danger level at Rajshahi and Pankha points while 21 cm above the danger mark at Talbaria point this morning, he added.

Of the total 61 river points being monitored in Ganges and Brahmaputra Basins regularly, water levels increased at 40 stations, while decreased at 18 stations and remained stable at two points at 9 am today.

Besides, the water level of the Korotoa River and the Jamuna River which flowing in Bogura and Sirajganj districts have also seen a rising trend this morning worsening the flood situation in the two districts further.

The Jamuna River increased by two cm each at Sariakandi in Bogura, six cm at Kajipur in Sirajgonj and five cm at Sirajgonj point and the river was flowing 119 cm, 100 cm and 88 cm above the danger mark at Sariakandi, Kazipur and Sirajgonj points respectively this morning.

He also said the water level in Gur River increased by three cm at Shingra point in Natore district and the river was flowing 93 cm above the danger mark.

The Atrai River was flowing 106 cm above the danger level at Baghabari point in Sirajganj district with four cm further rise this morning.

Water level in the Mohananda River also increased by five cm at Rohanpur and seven cm at Chapainawabganj while the Little Jamuna River increased by three cm at Naogaon. But the rivers were still flowing 73cm, 91 cm and 15 cm below the danger level at the three points respectively.

Of the 14 river points both in Ganges and Brahmaputra Basins, monitored in almost all eight districts under Rajshahi division, water levels increased at 11 stations, while decreased at two stations and stable at one point.

Meanwhile, the flood situation in many areas has worsened because of inundation of new more areas and the collapse of flood control dams and embankments at different areas in the division.

Around 20 thousand families of one hundred villages of five upazilas in Pabna district have been marooned as they were waterlogged. Many of the affected areas are also facing massive river erosion.

Asif Anam Siddiquee, Upazila Nirbahi Officer of Bera said a large number of people of four unions in Bera upazila have been affected by the flood.

Four unions have been affected for immense waterlogging while several hundred families in the affected areas have been marooned in Sujanagar Upazila, said UNO Rawshan Alam.

Hundreds of houses and mosques have been flooded by the mighty Jamuna River in Sirajganj during the last couple of days.

A good number of people have become homeless and indigent due to the river erosion. The affected people took refuge in shelter centres for their for safety, leaving behind their belongings including furniture, household goods and even cattle heads.

Some three other nearby villages of Sadar upazila are on the verge of erosion. The river erosion started Saturday in Panchthakuri area of Chowgacha union and washed away hundreds of houses.

The on going flood has been causing a huge financial loss to the betel leaf farmers in Rajshahi district besides posing a serious threat to the cash crop farming in the days to come.

According to sources of the Department of Agriculture Extension (DAE) and farmers concerned, the extent of loss caused by the natural disasters is estimated at around TK 5.5 crore which is detrimental to the farmers. 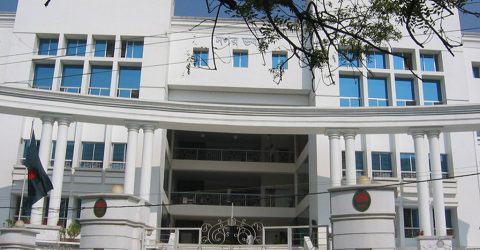