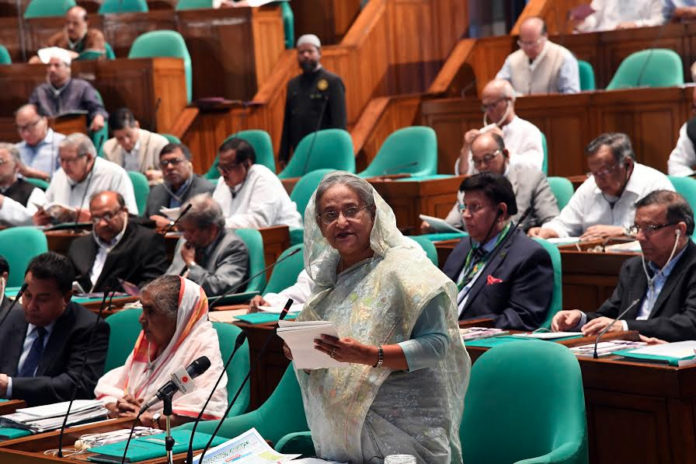 DHAKA, – Prime Minister Sheikh Hasina today said her government was determined to implement the national budget for the coming 2020-21 fiscal despite the coronavirus hurdles as many analysts feared it could be a tough job because of continued COVID-19 onslaughts.

“We have never failed to implement budgets and we will also not fail in the future as well,” she said while taking part in the general discussion on the budget as the Leader of the House in the eighth session of the eleventh parliament.

The premier said many people described the budget to be “highly-ambitious” while she was aware of the challenges which the government was likely to face in implementing the budgetary proposals amid the COVID-19 crisis that virtually halted the global economy.

She said her government would make its way ahead towards building the “Sonar Bangla” free from poverty-and-hunger as dreamt by Father of the Nation Bangabandhu Sheikh Mujibur Rahman while the implementation of the Taka 5.68 lakh crore “balanced budget” would be part of that endeavour.

“I personally believe a proper plan and due courage will make it possible . . . frustration never hold us back,” Sheikh Hasina said.

The premier said her government always goes ahead with a goal and specific work plan “but at times we have to reset the plan considering the situation and necessity as well”.

But, the prime minister expressed her firm determination that Bangladesh would once again join the journey towards the development by offsetting the economic impact of the global pandemic as she said, “We have a very strong socio-economic position in the world.”

Bangladesh has been approaching ahead with a vision of making the country a happy and prosperous one although it is currently facing the global pandemic, she said, adding that “Bangladesh would go ahead towards the developments by overcoming all the hurdles and it is currently doing so.”

The premier said in the FY 21 Taka 5.68 lakh crore has been proposed in parliament by the Finance Minister in view of meeting up the temporary needs in the health sector as well as overcoming the damages in various sectors of the economy caused by the coronavirus pandemic.

Noting that this is the 20th budget of the Awami League government with three by the post independent government led by Bangabandhu and two by the present government, she said, “Priority has been given on streaming the economy alongside protecting the lives and livelihoods in face of the coronavirus.”

Besides, health, agriculture, and employment generation have been prioritised in giving allocation in the annual development programme of the budget, she continued.
Sheikh Hasina said that they have set a target of 8.2 percent GDP growth in FY 21 as they are hopeful that the world and domestic economy will recover their fallouts gradually in 2021 after facing the COVID-19 and the country’s economy will retain its previous condition again.

The prime minister said they have taken the required measures in order to maintain stability in the macro economy and low inflation rate.

Justifying the placement of such a huge budget with a target of 8.2 percent GDP growth although the coronavirus has been rattling the entire world, the premier said four assumptions have led to place such a budget.

The assumptions are: (Ka) though the economic productions have been hampered due to the COVID-19 outbreak, but there were no damages of economic infrastructures which usually occur in natural disasters or wars.

(Kha) The employment generation will be increased with escalating government expenditure and internal demand will increase with increasing personal income while the production and supply will reach to its prior position if the stimulus packages are implemented properly.

(Ga) The normalcy in the livelihoods in Europe and America will likely to return quickly if the COVID-19 vaccine hits the market within October or November and thus our export earnings will retain its prior position.

(Gha) Fuel prices are gradually increasing in the international market, so the present crisis regarding overseas employment and remittance will end.

The premier said her government has taken multifaceted measures to overcome the crisis arising out of the COVID-19 pandemic since its breakout alongside formulating an overall work plan to offset the adverse impact on the country’s economy.

“We have implemented some of the works quickly, and are taking some short-and-long-term initiatives to overcome the hurdles following the coronavirus pandemic,” she said.

She continued the work plan has four main strategic aspects that included increase of government expenditure, formulation of packages on financial assistance, expansion of the areas of social safety net programmes and finally increase of supply of money in the market.

The prime minister said the government has already announced 19 stimulus packages of Taka 103,117 crore in a planned way and well before it is required aimed at reaching its benefit to the vast people.

“With starting implementation of the packages, as many as 5.70 crore people have so far got its benefit directly. If the 19 stimulus packages are implemented properly 12.55 crore people would get its advantage while 1.60 employment will be protected and generated as well,” she added.