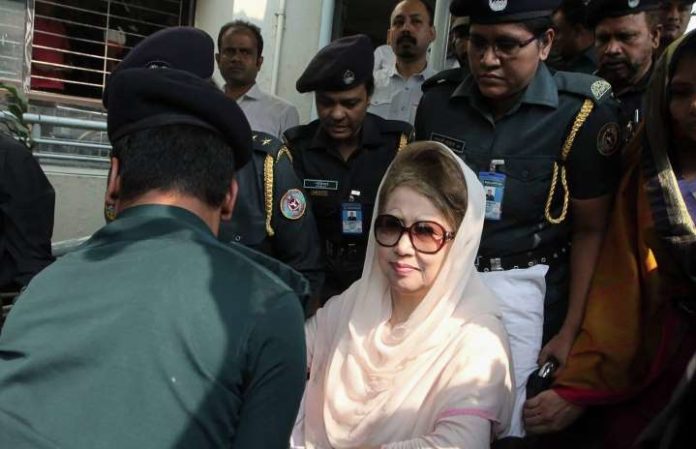 “Following Prime Minister’s order and as per the law we have decided to stay her sentence for six months and she will be released for a period of six
months when she must stay in her own house and take treatment in the country. She would not be able to go abroad during the time,” Law Justice and
Parliamentary Affairs Minister Anisul Huq told journalists at a briefing at his Gulshan house.

The law minister said the decision was taken as per section 401 (1) of Code of Criminal Procedure. “I have sent my opinion to Ministry of Home Affairs a little earlier,” said Anisul Huq.

The law minister said Khaleda Zia’s brother Shamim Iskander, sister Selima Islam and brother-in-law Rafikul Islam had called on Prime Minister Sheikh Hasina and pleaded to release her on executive order. After that the Prime Minister asked to take decision as per the law in this regard, said Anisul.

The decision would come into effect once the Ministry of Home Affairs would approve it.

Home minister Asaduzzaman Khan Kamal said his office would take steps for 74-year Zia’s release, now being treated for old-age complications at the
prison cell of a state-run specialized hospital, “as soon as we receive the file from the law ministry”.

Home ministry officials, however, said the law ministry’s proposal reached them by now while they were now executing the legal procedures to be approved “finally by the prime minister”. “Under the current situation sending someone abroad is like telling her to commit suicide,” Law Minister Anisul Huq added.

Dhaka special judge court-5 on February 8, 2018, sentenced the BNP leader to five-year imprisonment and other five accused including her “fugitive”
elder son and BNP’s senior vice chairman Tarique Rahman, to a 10-year imprisonment each.

The court also fined them Taka 10 lakh each, in default, have to suffer more six months in jail. “This is a decision we welcome,” BNP leader Ruhul Kabir Rizvi told newsmen in brief comments at the hospital premises while Zia’s younger sister Selima Islam said “I thank Prime Minister Sheikh Hasina”.