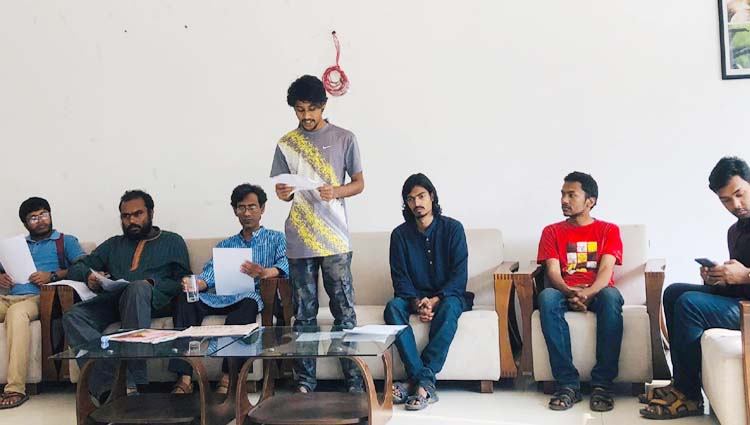 Shahadat Sumon, JU correspondent: A faction of teachers and students of Jahangirnagar University (JU) alleged that the authorities have decided to build another academic building destroying a large forest near the science factory of the campus.

Under the banner of `Jahangirnagar Against Corruption’ they demand to relocate the construction revising the master plan in a press conference held at the university`s new arts building on Thursday.

In a written statement, president of `General Student Rights Council’ Armanul Islam Khan said, “The authorities agreed to revise its master plan for construction works under the mega project because of the protest of the teachers and students. Recently they have taken another plan of constructing Institute of Business Administration (IBA) building destroying the biodiversity of the campus. Due to the deviation of the master plan, a large amount of forest has to be cut there and this decision has made without discussing with all the concerned stakeholders of the university.

“Four months have passed since the BCL attack on us. After several attempts, demanding the proper trial of that brutal attack the administration has not taken any action so far according to the rules of the university. Recently there has been a rumor about money deal centering three lecturer’s appointment at Public Health and Informatics department. Again, efforts are being made to recruit the president of a section of the Nationalist Teacher Forum ignoring the qualified candidates.” he added.

Professor Rayhan Rayne of Philosophy department and organizer of the platform announced their new programme as part of their on-going protests demanding removal of vice chancellor Professor Farzana Islam over those irregularities and corruption allegation.

They announced a protest rally on March 8, campaigning across campus on March 8 and 9, the flag march protesting state detachment from the main gate of the university on March 10.