“BNP is now doing ‘issue-based’ politics after losing public support and failing in election as well as movement. If anything occurs in the country, they want to make it an issue to wage movement,” he said.

He was addressing a press conference after holding a view-exchange with Dhaka City South unit of AL ahead of Mujib Year at the party president’s Dhanmondi political office here.

The road transport and bridges minister said the government has all-out preparations for the celebration of Mujib Year marking the birth centenary of Father of the Nation Bangabandhu Sheikh Mujibur Rahman.

Quader said those who became leaders of BNP after its formation were the masterminds of Bangabandhu assassination and that is why BNP could not accept the father of the nation.

But BNP could not tarnish the achievements of Bangabandhu after doing all sorts of conspiracy, he added.

He said none will go unpunished doing misdeeds as the Prime Minister Sheikh Hasina’s government is very strict to this end.

Replying to another question, the minister said the AL government believes in independence of judiciary and rule of law.

He said some opportunists intruded into Awami League but no wrongdoers will be spared.

Quader said they discussed the upcoming by-election in Dhaka-10 constituency in the meeting. 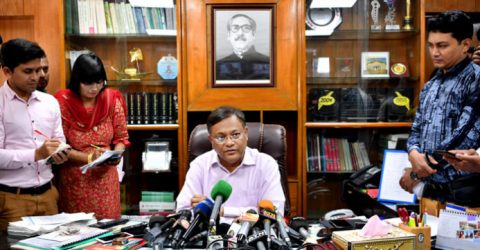 BNP will no more be ashamed to chant ‘Joy Bangla’ slogan: Hasan
Latest