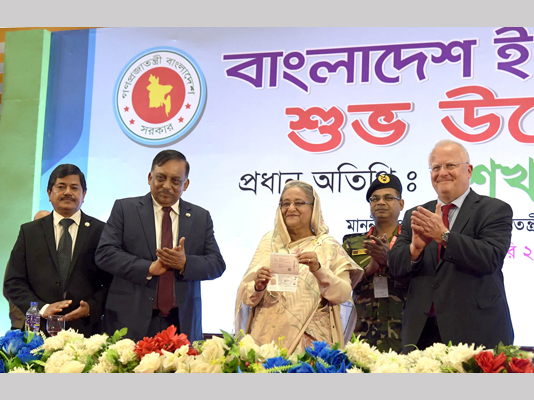 DHAKA,  – Prime Minister Sheikh Hasina today launched the much-awaited electronic passport (e-passport) along with the automated border control management programme, saying that it (e-passport) is a gift for the nation in the “Mujib Barsho”.

“We’re handing over the e-passport to the people of the country in ‘Mujib Barsho’, the special year, coinciding with the birth centenary celebration of
Father of the Nation Bangabandhu Sheikh Mujibur Rahman. It (e-passport) is a gift for the nation in the Mujib Barsho,” she told the inaugural function of the e-passport and automated border control management programme at Bangabandhu International Conference Centre (BICC) here this morning.

The premier added: “I do believe that e-passport and automated border control management will undoubtedly brighten Bangladesh’s image in the
digital world.”

Sheikh Hasina said due to the introduction of the e-passport, Bangladesh will advance another step forward and the people will no more be deceived
regarding the passport.

“There was a problem in the past about the passport as ‘galakata’ (tampered) passport was used at that time. But due to launching of the e-
passport, it (fraudulence) will never happen … the people will no more be cheated and they could move with transparency,” she said.

The prime minister said in the e-passport, there will be embedded micro processor chip that will contain all information along with the photo,
fingerprint and iris of eye of the passport holder.

“E-gate is going to be incorporated with e-passport, and once e-passport and e-gate are introduced, the immigration and passport services will be
easier, smooth and international standard ones,” she said. Sheikh Hasina said the government wants to advance through keeping pace with the world, and the Awami League is working to achieve the goal.

“We’ll celebrate Mujib Barsho from March 17, 2020 to March 17, 2021 and its countdown has already started … we’ll also celebrate golden jubilee of
independence in 2021,” she said. The prime minister said: “The people of the country will get e-passports in the ‘Mujib Barsho’ and that’s why I congratulate them.”

Expressing gratitude to the people for reelecting the Awami League government through votes, Sheikh Hasina said, “I express my sincere gratitude
to the countrymen for keeping confidence and trust in us and giving a scope to serve them again.”

The prime minister said her government is working relentlessly to turn Bangladesh into a developed, prosperous and dignified country.

“We advanced far long economically and economic solvency has come to the life of the people and many people go abroad. Expatriate Bangladeshis are working abroad and send remittances which are making a huge contribution to our economy … So, we remain careful so that they don’t become victims of any type of harassment,” she said.

The prime minister said 118 countries have already introduced e-passports and Bangladesh is the 119th country which launched such passports.

“We’ve reached such a position and Bangladesh is the first country in South Asia which has been able to introduce e-passports,” she said, extending her sincere thanks to all concerned involved in the project. Sheikh Hasina said her government is working on building an educated nation based in science and technology.

“In our election manifesto before the 2008 elections, we declared that Bangladesh will be a “Digital Bangladesh” and accordingly we made arrangements so that modern technologies are used everywhere and we also waived taxes so that computers, laptops and their parts are available to the people,” she said.

The premier went on saying: “The government also made arrangements to provide computer education to the students…. We’re now getting its good
results and as a result a digital revolution took place in the country.”

Sheikh Hasina said her government has been able to provide internet connection almost the entire country. “Optical fibre connection has reached 3,500 unions and we launched Bangabandhu-1 Satellite,” she said. The premier said the government has digitalised all the activities of the DIP to attain the immigration-related SDG.

“We’ve also set up 69 passports offices in 64 districts, 33 immigration check-posts and passports and visa wings at 75 missions abroad aiming to
reach the passport, visa and immigration services to the doorsteps of the people,” she said.

The prime minister said the government launched the Machine Readable Passports (MRP) and Machine Readable Visa (MRV) in 2015. “The MRPs were so far issued to about 2.7 crore Bangladeshi citizens, while MRVs to 15 lakh foreigners,” she said.

Home Minister Asaduzzaman Khan Kamal chaired the function, while German Ambassador in Dhaka Peter Fahrenholtz was present at the function as the special guest.

Project Director of the e-passport Project Brigadier General Saidur Rahman Khan gave an overview about different aspects of the project.

Later, the home minister formally handed over the prime minister’s e- passport to her. Sheikh Hasina later inaugurated electronic passport (e-passport) and automated border control management programme by unveiling a plaque. She also opened the e-passport complex and visited enrolment booth of the e-gate from the BICC.

The validity of e-passport will be five and ten years. Asaduzzaman said after the inauguration, initially the Department of Immigration of Passports (DIP) will distribute e-passport from Agargaon, Jatrabari and Uttara passport offices.

He hoped that the e-passport will be introduced all over the country by 2020 and every day 25,000 passport can be issued.

Besides, separate fees have been fixed in Bangladesh missions abroad for general applicants, workers and students.

According to the International Civil Aviation Organisation (ICAO), there are over 100 states and non-state entities (i.e. United Nations) currently
issuing e-Passports, and over 490 million e-Passports are in circulation. The e-passports add a layer of security to traditional non-electronic
passports by embedding an electronic chip in the passport booklet that stores the biographical information visible on page 2 of the passport, as well as a digital security feature.

According to the project details, the project “Introduction of Bangladesh e-Passport and Automated Border Control Management” is being implemented at a cost of Taka 4,569 crore. With issuing the e-passport the whole process of the immigration formalities will be completed through online.

It said two million e-passports will be made in Germany. As a result, the passports of those who apply first will be made from Germany. The DIP and
Germany Veridos signed an agreement on July 19 in 2018 for electronic passports alongside machine-readable ones. 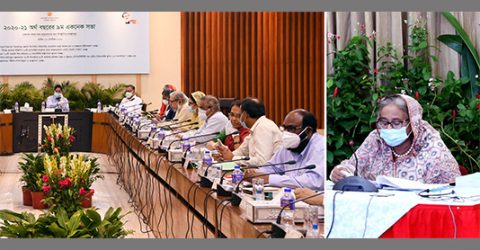 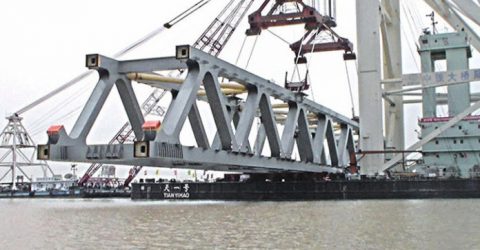