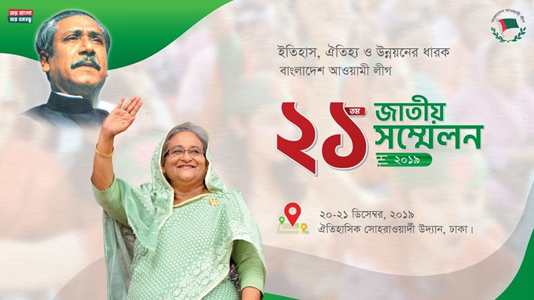 Awami League President and Prime Minister Sheikh Hasina will inaugurate the two-day council through releasing the symbol of peace pigeon at 3pm at the historic venue, the site of Bangabandhu’s landmark 7th March address and surrender of Pakistani troops in 1971.

The theme of the council is “On the way to implement Bangabandhu’s dream of Sonar Bangla under Sheikh Hasina’s leadership, being advance irresistibly: We are Bangladesh”.

The main council session will be held on December 21 at Institution of Engineers drawing over 7,000 councilors from across the country a day after
it’s opening at the Suhrawardy Udyan.

The council venue wore a festive look with crowds of onlookers and organizers to witness the preparedness while in the evening it was illuminated gorgeously and decorated with banners and festoons. Portrait of Bangabandhu and Sheikh Hasina were seen in the area along with some festoons
carrying the history and tradition of AL as well as the symbols of party’s development activities.

The main stage of the council was prepared which is 102 feet in length and 40 feet in width and looks like a ‘Boat’, shipping on Padma River. Portrait
of National Memorial will be on the stage and behind the memorial; Bangabandhu and Sheikh Hasina’s portrait will also be there.

Joint secretary of AL also convener of Stage and Decoration sub-committee for the council Jahangir Kabir Nanak said this time decoration will be simple and there will be no decoration outside the Udyan. A total of 50 thousands councilors, delegates, leaders and activists will participate.

A card and two Compact Disc (CD) will be provided from the AL publicity committee carrying the documentation of the development project operated
during the AL regime. They also developed a webpage marking this council through which the council will be live telecasted live streamed, opening up
an opportunity for the party leaders, activists and others to get connected online with Suhrawardi Uddyan.

Others preparation including preparing uniforms for the volunteers, delegate card, posters, banners and leaflets has already completed. Stringent security vigil were enforced in the capital coinciding with the council while Awami League and some 2,000 trained party volunteers were mobilized to ensure discipline and security in and around the council venue.

“The party volunteers will work alongside law enforcement agencies in a coordinated way,” member secretary of Discipline and Volunteer Affairs sub-
committee for the council, AFM Bahauddin Nasim told BSS.

He said some 2,000 volunteers were drawn from Swechchhasebak League, Jubo League, Chhatra League and other likeminded organization to ensure security and discipline at the council venue.

Awami League (AL) General Secretary Obaidul Quader said the new committee will be modern and organised with the new and old people under the leadership of Sheikh Hasina. We have to go forward putting Bangabandhu’s ideology in heart. 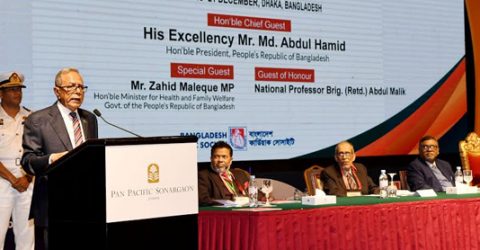