DHAKA,  – Dhaka today sought identities of some perpetrators as well as financial information over Bangladesh Bank (BB) reserve heist of 2016.

“We urged them to share identities of some of the perpetrators regarding the heist which will help us (Bangladesh investigation agency CID) to give charge sheet of the case (over BB reserve heist) lodged here,” Foreign ministry secretary (Asia & Pacific) Masud Bin Momen told reporters at a briefing here today.

Masud, the just past Bangladesh permanent representative in the United Nations, was briefing newsmen after emerging from the second Foreign Office Consultation (FOC) meeting between Bangladesh and Philippines at the State Guest House Meghna.

Hackers stole a total of US$101 million from Bangladesh’s account with the New York Fed in February 2016. Of the amount, $81 million was transferred to four accounts with the Rizal Commercial Banking Corp. (RCBC) in Manila and another $20 million to a bank in Sri Lanka.

Later, the BB was able to retrieve about $15 million from the Philippines.

During the today’s meeting, Masud who led the Bangladesh side said they had a fruitful discussion regarding the issue and Philippines assured to provide financial information and identities of the perpetuators involved in the heist.

If these two issues are resolved, the secretary said it will be easier for Bangladesh to give a charge sheet in the case filed here.

Masud said Bangladesh also demanded to get US$20 million dollars that was realized by the Philippines government from RCBC as fine regarding the heist. He, however, said the Philippines claimed that there has been no direct link between the fine of US$ 20 million and stolen money from Bangladesh as they impose it to RCBC for violating their banking law.

“But we made our demand claiming that the fine was imposed in connection with the same issue (BB heist),” he said.

He said cybercrime is an emerging phenomenon and Bangladesh wants to resolve the issue “amicably” through discussion with Philippines to set an example for other countries.

“I told them (Philippines) we can set an example if we can resolve it amicably to the best of our ability. Then it will be a model for other countries,” he said.

On January 10 this year, a Philippine court found Maia Deguito, who managed RCBC’s Makati City branch, guilty of eight counts of money laundering tied to the heist. It sentenced her to a 32 to 56 year prison term and a $109 million fine.

Masud said both Bangladesh and the Philippines side stressed more cooperation between them to find out a solution regarding it.

Apart from heist discussion, he also said they discussed all the components of bilateral relations between the two countries including climate change, migration and disaster risk reduction.

Masud said they also urged the Philippines to mount pressure on Myanmar through the ASEAN, platform for starting safe and dignified Rohingya repatriation from Bangladesh.

The both sides also exchanged numbers of MoUs, he added. 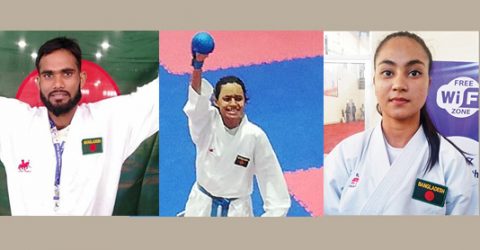