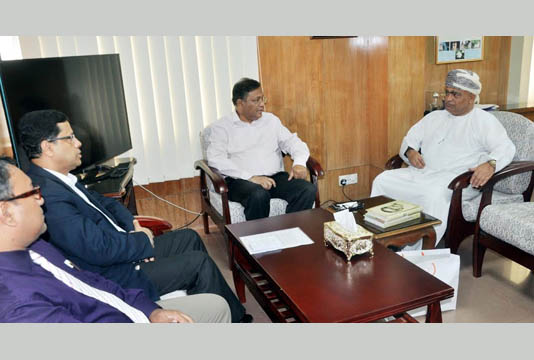 “BNP always did politics by holding the people hostage . . . for this, they have become an isolated party,” he told reporters at a press briefing at his office in the Secretariat.

The minister said BNP would become “the inhabitants of a deserted island” if they follow the wrong path in the politics continuously and stand against the common people and launch attacks on the masses.

Earlier, the ambassador of Oman Taeed Salim Abdullah Al Alawi paid a courtesy call on the information minister at his office.

Hasan said BNP didn’t do politics for the welfare of the common people. BNP did politics only for their own interest, not for the mass people, he added.

The minister said BNP has indulged in ill politics. “People do politics for the welfare of the country and its people, but BNP is doing politics of arson and petrol bomb attacks on the common people,” said Hasan, also Awami League publicity and publication secretary.

Replying to a query about the leadership of Jubo League, the minister said the every newly elected leader of Jubo League and other associate bodies of Awami League are honest and the leaders have transparent images in society.

He said Ershad and Begum Khaleda Zia had fully criminalized the politics which was started by Ziaur Rahman. Now, Prime Minister Sheikh Hasina is making leaders the educated and honest people with good soul, coming out of criminalization and merchandising of the politics, he added.

The minister said, “I believe that this trend will be good for politics and the country as well. I hope that the party which took shelter of criminalization and petrol bomb attacks and patronized the terrorism will take lessons from this initiative of the prime minister.”

Hasan said both the Jubo League president and the general secretary are educated, honest and good organizers. He hoped that the new leaders will make the organization a vanguard before the new generation in the upcoming days.

About the meeting with the Oman ambassador, the minister said many bilateral issues were discussed with him.

He said the envoy informed that around seven lakh Bangladeshis out of 20 lakh foreigners are working in Oman and they are working with efficiency and honesty. The workers are making contributions to the economic growth of Oman, he added.

Hasan said, “We also discussed about the Rohingya issue. The ambassador put emphasis on working in unison to resolve the Rohingya crisis. He also informed me that Oman has built a village in Cox’s Bazar for the Rohingyas where 1600 families have been accommodated.”

Information Secretary Abdul Malek was present in the meeting.