“We have targeted 18 lakh people in nine coastal districts to shift them to safer places to save their lives from the cyclonic storm “Bulbul”.
Bangladesh Army, Coast Guards, local administration, volunteers of the cyclone preparedness programme, officials and employees of the Disaster
Management Ministry are jointly working in the evacuation drive,” he added.

“In most vulnerable areas including chars (small island), we are trying to help people move out along with their valuables and cattle as well,” he said.

Kamal said the evacuees were being provided dry food while “we have enough stock of relief materials for them”.

Bangladesh Meteorological Department (BMD) issued great danger signal number 10 has been issued for Mongla and Payra maritime ports and 9 for
Chattogram port as very severe cyclonic storm ‘Bulbul’ is likely to move in a North/Northeasterly direction and may cross West Bengal- Khulna coast near Sundarbans by this evening.

Chattogram, Noakhali, Laxmipur, Feni, Chandpur and their offshore islands and chars have came under great danger signal no 9 while the maritime port of Cox’s Bazar has also been advised to hoist local warning signal no. 4, a Met Office weather bulletin said.

The coastal districts of Khulna, Satkhira, Chattogram, Noakhali, Laxmipur, Feni,Chandpur, Borguna, Patuakhali, Barishal, Bhola, Pirozpur, Jhalokathi, Bagerhat and their offshore islands and chars are likely to be battered by wind speed upto 100-12kph in gusts/squalls with heavy to very heavy falls under the influence of the storm.

The bulletin said under the influence of the very severe cyclonic storm ‘Bulbul’ and the moon phase, the low lying areas of districts of Chattogram,
Noakhali, Laxmipur, Feni, Chandpur, Borguna, Bhola , Patuakhali, Barishal, , Pirozpur, Jhalokathi, Bagerhat, Khulna, Satkhira and their offshore islands and chars are likely to be inundated by storm surge of 5-7 feet high above normal astronomical tide.

Maximum sustained wind speed within 74km of the very severe cyclone centre is about 130kph, rising to 150kph in gusts or squalls and will remain very high near the very severe cyclonic centre, the bulletin added. All fishing boats and trawlers over North Bay have been advised to remain in shelter till further notice. 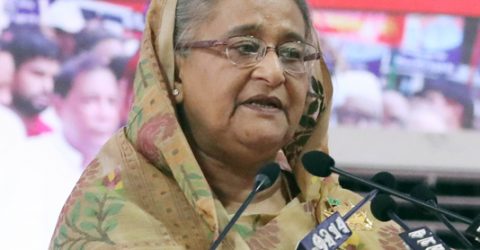