No controversial leader will have place in AL committees: Quader

DHAKA, – Awami League General Secretary and Road Transport and Bridges Minister Obaidul Quader today warned that controversial leaders would not hold any place in the new committees of the party and its associate bodies.

“I do not want to say anything about the changes and expansion in leadership. But, I want to say if any leader becomes controversial, he or she
will not get a post in the new committees,” he told a press conference at the conference room of the ministry here.

About BNP’s demand for its chairperson Begum Khaleda Zia’s release, the AL general secretary said: “Though it is a matter of legal procedure, BNP is
doing politics over the release of Khaleda…creating pressure on the government.”

He said BNP leaders frequently talk about waging a movement against the government to release their chairperson, but they have not started any
movement yet.

“Senior BNP leaders have been saying that there is no alternative to starting a movement to release Khaleda…but we will not impede their
movement. If people respond to their call, they can carry on with the movement.”

About the leadership in Jubo League, Quader said he has nothing to say about it right now. The Jubo League council will be completed as per its
constitution, he added. 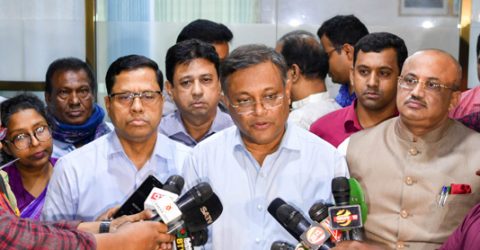