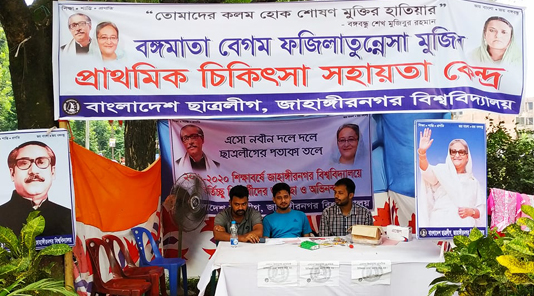 Sani Ahmed, an admission aspirant, came to sit for the entrance test under “C” unit of the university today. When he arrived at the university gate, he had only five minutes in hand to reach the exam hall.

At that moment, a joint secretary of JU BCL, Shafin quickly took him to the exam hall by his motorcycle within the remaining time.

“It could be difficult for me to reach the exam hall in time unless I got the cooperation from the Chhatra League leader. I am really grateful to the leaders and activists of BCL,” Sani said.

Like Sani, a large number of applicants have been getting cooperation from BCL leaders and activists who remain ready at several points on the campus during the time of admission tests.

JU BCL leaders and workers have been providing the services to the admission aspirants during the entry tests by introducing ‘Joy Bangla Bike Service’. The student wing of the ruling Awami League is also providing other assistances by setting up help centers, providing free medical service, supplying safe drinking water since the admission tests of the university started on September 22, JU BCL sources said.

Another admission seeker named Mim, who received primary healthcare service from the BCL’s ‘Bangamata Begum Fazilatunnesa Mujib Primary Treatment Support Center’, appreciated the BCL’s initiative, saying that it was very helpful for the admission aspirants who came from different parts of the country.

Expressing satisfaction over JU BCL’s services, she said: “If I get chance to get admission to the university, I will try to join the student organization in future to take part in such voluntary activities.”

A help center named ‘Sheikh Russel Admission Support Center’ has been set up near the university’s main gate through which most of the students enter the university.

More than 1,000 admission seekers throng the help center every day during the admission tests to get their required information.

Each of the help centers provides necessary information to more than 1,000 applicants every day.

The “Joy Bangla” bike service of the ruling party backed student organization earned reputation as it is helpful for the newcomers who are strangers in the university.

A total of 50 bikes have been engaged in carrying the applicants to their exam halls in the quietest possible time.

In addition, the makeshift medical center named ‘Bangamata Begum Fazilatunnesa Mujib Primary Treatment Support Center’ has been set up on the Central Shaheed Minar premises as it is the center of gathering for the students after coming out of any exam center.

More than 3000 applicants received primary health services from the medical center in the last six days during the admission test.

The BCL leaders and activists are also arranging accommodation for the students, who are coming to the university to appear in the admission tests.

They are also distributing leaflets containing university map and roadmap among the strangers.

“We are assisting the admission seekers as per the instruction of the BCL central committee. Every year, we see that the applicants face different problems to attend the admission tests as the campus is totally unknown to them,” President of BCL JU unit Jewel Rana told BSS.

So, the BCL, as an ideology-based student organization, is trying its level best to help the students, he said, adding that their cooperative activities will continue till the last day of examination that is scheduled to end on October 1.

Pledging to instill the ideology of Father of the Nation Bangabandhu Sheikh Mujibur Rahman into the general students, Jewel said, “We will take more pro-student initiatives to encourage the general students to join the BCL. After the admission test, we will conduct a cleanliness campaign the on campus”. 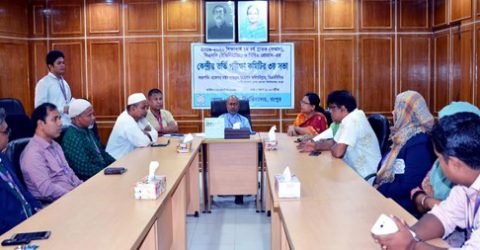