Bangamata played a courageous role remaining behind the scene: Quader 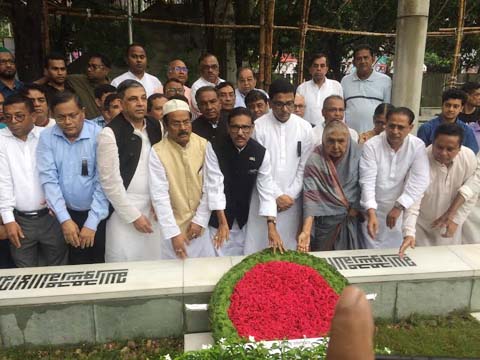 “But she always preferred to remain behind the scene,” Quader said paying his homage to her coinciding with Bangamata’s 89th birth anniversary by placing wreaths at her grave at the Banani graveyard this morning.

He said during long 12 years Bangabandhu was behind the bars when Begum Fazilatunnesa had to run her family and simultaneously play a crucial and courageous role in managing the party as well from behind the scene.

“Today, we are here to pay tributes to the fearless and brave woman, our Bangamata”, said Quader.

He said Bangamata was not mere a life partner of Bangabandhu, but also a reliable political friend.

“Today is her birth anniversary. . . She was also assassinated brutally in this month as well. The month brings us joy of her birth in one hand and pain
of her martyrdom on the other,” Quader said.

Earlier, leaders of different political, social, cultural and student organizations, including Awami League’s associated bodies paid homage to
Bangamata by placing wreaths at her grave. They all also joined a doa-mahfil at the scene seeking eternal peace of her departed soul.

Bangamata Sheikh Fazilatun Nesa Mujib, wife of Bangabandhu and mother of Prime Minister Sheikh Hasina was born at Tungipara village of Gopalganj district on this day in 1930. She was assassinated brutally along with Bangabandhu and most of her family members on August 15, 1975.