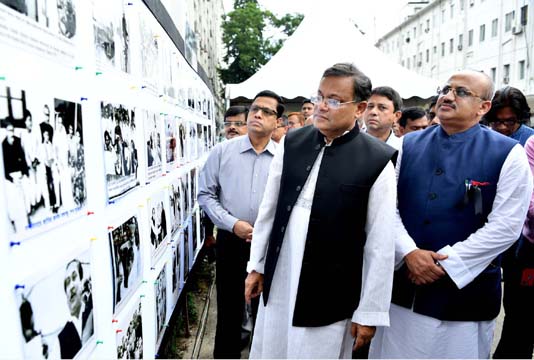 “It is necessary to unmask those, who were involved with the blue print to carry out the August 15 carnage, before the nation by constituting a commission. It is a public demand now,” he told the inaugural ceremony of a photo exhibition on Bangabandhu in front of the Secretariat Clinic Bhaban here.

Hasan, also Awami League publicity and publication secretary, said it is not possible to ensure justice by trying only those who killed Bangabandhu directly.

To ensure justice, the behind the scene masterminds of the assassination should be brought to justice, he added.

Hasan said Ziaur Rahman rehabilitated the killers of Bangabandhu and passed the Indemnity Ordinance which proved his involvement with the August 15 carnage.

The information minister said Bangabandhu had a dream to turn the country into a developed one.

He said the architect of independent Bangladesh could not materialize the dream as he was assassinated just three and an half years after the country’s independence.

Now under the dynamic leadership of Bangabandhu’s daughter Prime Minister Sheikh Hasina, the country is moving fast on the highway of development, he added.

Hasan said a vested quarter is hatching conspiracy to halt the country’s current trend of development.

“This evil force is BNP-Jamaat alliance who patronizes terrorist groups. They are out to spread different rumors to create instability in society,” he said.