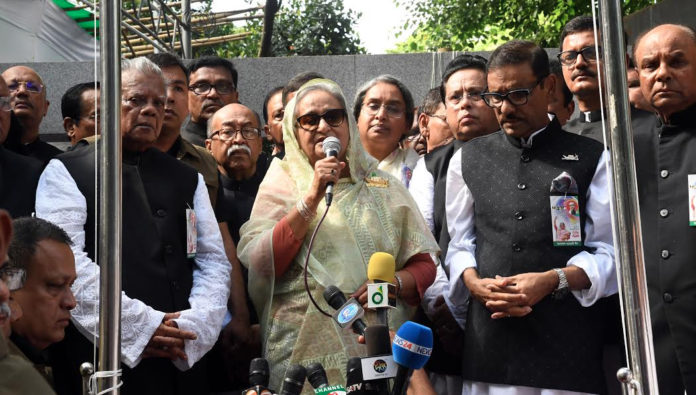 “On this historic day, it’s our pledge to build a hunger-and-poverty-free developed and prosperous ‘Sonar Bangla’ as dreamt by Father of the Nation
Bangabandhu Sheikh Mujibur Rahman,” she said after inaugurating the programmes in front of Bangabandhu Bhaban at Dhanmondi in the capital this morning.

Sheikh Hasina, also the AL president, said Bangladesh is marching forward towards socioeconomic development and the Bangalee nation achieved dignity in the entire world after Awami League came to power.

“The nation lost this dignity after the assassination of Bangabandhu on August 15 in 1975,” she said. The prime minister said the Awami League was founded to bring back the lost independence of Bangla.

“Today is the founding anniversary of that Awami League,” she said, adding, “Whenever Awami League comes to power, it gives (something) to the
country and people,” she said.

At the outset of her speech, the Awami League president narrated the history of establishment of the country’s oldest and biggest political party.

She also paid tributes to Bangabandhu and four national leaders as well as numerous party leaders and workers who sacrificed their lives ungrudgingly for establishing rights of the people.

Earlier, Sheikh Hasina placed a wreath at the portrait of the Father of the Nation in front of Bangabandhu Bhaban marking the 70th founding
anniversary of Bangladesh Awami League.

After laying the wreath, the prime minister stood in solemn silence for sometime as a mark of profound respect to the memory of Bangabandhu, the
architect of independence.

Flanked by senior leaders of the party, Sheikh Hasina, also the president of Bangladesh Awami League, placed another wreath at the portrait of
Bangabandhu on behalf of her party.

Bangladesh Awami League was founded on this day in 1949, which was later transformed into the biggest political party of the country by leading all
the democratic-political-social-cultural movements including the long arduous struggle for freedom and the War of Liberation. 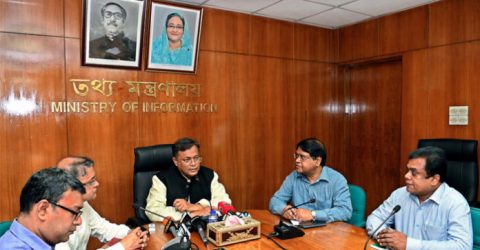